This new take on Hocus Pocus will pick up 29 years after Max first lit the black candle and brought the terrible trio of witches to life. By some unknown method, the youth absorbing sorceresses will be resurrected once again in the town of Salem. Like any good screen villains, though, the sisters Winifred (Midler), Sarah (Parker), and Mary (Najimy) will have only one thing on their minds revenge.

The only people who can stop them? Well, three plucky teenagers, of course! Who else would you expect? Those teens are Cassie (Lilia Buckingham), Izzy (Belissa Escobedo) and Becca (Whitney Peak). Can they take down the terrifying trio? We’ll have to watch and find out when the film releases next year.

Doug Jones is also set to return for the sequel and will reprise the role of Billy Butcherson. Billy’s was Winifred’s former lover who she caught kissing Sarah. Not one for infidelity, she had him poisoned but enjoys using her powers to resurrect him as a zombie.

Other new faces in the cast include Tony Hale, Sam Richardson, and Ted Lasso’s Hannah Waddingham.

Hocus Pocus 2 is set for a Fall 2022 release date and will air exclusively on the streaming service Disney Plus. 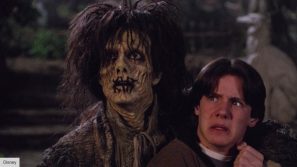