Production for the new adaptation of Stephen King’s sizzling novel Firestarter has now officially wrapped, after just two months of filming on location in Toronto, Canada. Baywatch actor Zac Efron broke the news yesterday via his Twitter page, sharing a behind-the-scenes photo with his followers celebrating the final day of shooting, and confirming that the horror movie is now moving into post-production.

First announced by Universal Pictures and Blumhouse Productions back in 2017, the highly anticipated thriller movie began filming earlier this year in May. This isn’t the first time the literary work has been on the big screen. Long-time horror fans might remember the first Firestarter movie, from 1984 , starring a young pyrokinetic Drew Barrymore as the flammable lead Charlie.

In the upcoming remake, Ryan Kiera Armstrong will be playing the role of Charlie McGee, while Zac Efron and Sydney Lemmon will be acting as the flammable girl’s parents – whose past as drug trial subjects have led to their child’s destructive abilities. Efron posted a picture on his Twitter with Armstrong, giving followers an update on the production’s status.

That’s a wrap on #firestarter movie! can’t wait for you guys to see this. @ryankarmstrong ❤️ @blumhouse pic.twitter.com/keZbKFCFhK

“That’s a wrap on [Firestarter] movie! can’t wait for you guys to see this,” Efron captioned the photo on Twitter.

Despite having now wrapped, little information about the movie is currently known. A 2022 release date is speculated; however, there has been no confirmation just yet. Keith Thomas is directing the movie, and Halloween Kills writer Scott Teems wrote the screenplay, but neither have disclosed information on when we can expect to see the reboot make its debut.

While we wait on updates, why not get your spooky fix by looking over our list of the best horror movies on Netflix. 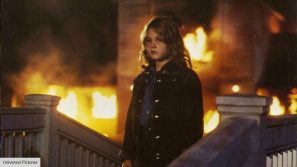