Filming on Evil Dead Rise is already almost done. Lee Cronin, director of the horror movie sequel, has been providing updates on Twitter, and posted about reaching the halfway mark.

“Six weeks. 100 rolls. 597 slates. We are halfway,” Cronin captioned an image of an Evil Dead clapperboard. he follow this up with a more tongue in cheek post of a bloodstained carpet, adding: “At the halfway point of shooting Evil Dead Rise I just wanted to express my humble gratitude for the chance to be making such a heartwarming and tender family drama.”

To be fair, there is a strong family angle here – it’s about two sisters, played by Alyssa Sutherland and Lily Sullivan, whose reunion is torn apart by Deadites and the Necronomicon. Gabrielle Echols, Morgan Davies, and Nell Fisher fill out the cast, all in undisclosed roles. In contrast to previous Evil Dead instalments, this one takes place in an inner city apartment building, hence the ‘Rise’ in the title. Filming is currently happening in New Zealand, and cameras started rolling in early June.

At the half way point of shooting #EvilDeadRise I just wanted to express my humble gratitude for the chance to be making such a heartwarming and tender family drama. pic.twitter.com/WnMNSI5m9q

Sam Raimi, Bruce Campbell, and Bruce Tapert are all serving as producers. Raimi picked Cronin personally for the director’s chair, based on his 2019 movie The Hole in the Ground. Unfortunately, Campbell has resigned himself to being behind-the-scenes, after hanging up his boomstick as previous recurring protagonist Ash Williams.

In a recent interview, Campbell called Evil Dead Rise “just another Evil Dead”, saying that fans can call it a reboot, sequel, spin-off, or whatever else they want. He also doubled-down on not appearing in front of the camera for this one whatsoever.

The film is due to arrive on HBO Max sometime next year, with distribution in other regions to be decided. Check out the best horror movies on Netflix for some frights you can enjoy right now. 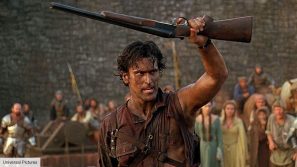