Someone’s either about to get a great Christmas present or really up their fancy dress game because Will Ferrell’s Elf suit has just been bought at auction. The suit was expected to sell for between £20,000 to £30,000, but one anonymous bidder spent £175,000 to get their hands on the costume.

To put into context how much money that is, £175,000 could buy 233,333 Twix chocolate bars, 38,000 copies of Elf on standard-def DVD, and Will Ferrell doesn’t have a Cameo account, but there’s a Buddy the Elf impersonator on there who’d do you 4,861 videos for that amount of cash.

The Elf suit sold as part of a huge auction of film costumes and props. So far, as part of the week-long auction, the company Prop Store has sold a number of iconic props from some of the best movies, including Marty McFly’s hoverboard from Back To The Future Part II, a puppet Terror Dog from Ghostbusters, and Anakin Skywalker’s prop lightsaber from Star Wars. Buddy’s tights weren’t the only costume up for auction either.

Tobey Maguire’s Spider-Man suit, Val Kilmer’s Batsuit and Freddy Krueger’s iconic knife glove have all been sold. Amazingly though, none of those items sold for as much as Buddy the Elf’s green jacket. Clearly, whoever bought it is one dedicated fan.

Elf has been hailed as a modern Christmas classic beloved by fans across the world. Despite the fan base, Ferrell has been pretty open about the fact that he won’t make a sequel to the popular family movie.

Apparently, he was approached about making Elf 2 and was offered an eye-watering $29 million to star in the film but declined because he doesn’t think a sequel would live up to the quality of the first.

“I would have had to promote the movie from an honest place,” he told The Hollywood Reporter. “Which would’ve been, like, “Oh no, it’s not good. I just couldn’t turn down that much money.” And I thought, “Can I actually say those words? I don’t think I can, so I guess I can’t do the movie.”

If you love Elf, check out our list of the best kids movies for more classic films. 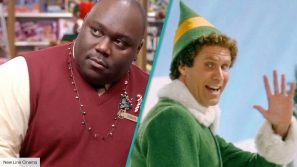