Doctor Who veteran Billie Piper has said she’d consider returning to the popular sci-fi series under the right circumstances. Piper made these comments while filming a short clip for her Cameo page, and said her return would depend on whether or not the “story was right.”

“Would I ever go back? I think if the circumstances and the story were right,” she says in the short clip. “I feel like I’ve had enough time away from it to really, really want back in on it. I feel like my kids are at a good age and may appreciate that too, which is often my incentive to do anything.”

Piper played Rose Tyler on Doctor Who from 2005 until 2010. Being the first companion of the revived series and the Christopher Eccleston’s Ninth Doctor has made Rose a fan favourite. In 2014 Radio Times conducted a huge online poll that featured every companion since 1963. Rose was crowned the ‘Companion Champion’, beating the main сompetitors Jack Harkness and River Song.  For our money, Donna is the best revival companion but no one asked us…

Billie may be considering a return to the TV series that made her name as an actor but some of those involved in Doctor Who’s revival have actually committed to a return. It was announced last week that Russell T Davies, the showrunner and writer who regenerated Doctor Who for the new millennium, was returning for the 60th anniversary special and a series beyond.

According to Billie Piper on one of her public CAMEO videos, she was asked if she’d go back “if the circumstances and the story were right” and that she’s had enough time away to really really want back in on it! #doctorwho pic.twitter.com/o5iddkzORT

“I’m beyond excited to be back on my favourite show,” Davies says in a statement via the official Doctor Who website. “But we’re time-travelling too fast, there’s a whole series of Jodie Whittaker’s brilliant Doctor for me to enjoy, with my friend and hero Chris Chibnall at the helm – I’m still a viewer for now.”

Jodie Whittaker will return as the Doctor for series 13 soon and she’s expected to regenerate the year after in a series of specials set for release in 2022. While we wait for news on the Doctor’s return why not check out our list of the best science fiction movies. 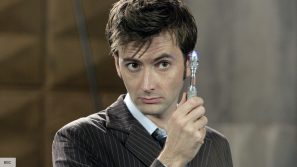