The bad news: Demon Slayer season 2 is coming to streaming service Crunchyroll a little behind the Japanese airdate. The good news: we’re getting an adaptation of the anime movie to break up the waiting time.

Funimation has announced that the Entertainment District arc of Demon Slayer is officially coming to English-speaking audiences this December. As the next proper season of the anime series, Entertainment District brings a new major demon to be slain, the formidable Daki. But before all that, we’re getting an altered version of Demon Slayer: Mugen Train, the highly successful animated movie based on the property.

Demon Slayer: Kimetsu no Yaiba Mugen Train Arc is a new, extended cut of the film that last seven episodes. In the press release, it’s said this version has new scenes, music, opening and closing sequences, and one full original episode’s worth of fresh storyline. This will directly branch season one, the Tanjiro Kamado, Unwavering Resolve arc with Entertainment District, creating what should be a seamless timeline for fans to enjoy front-to-back.

The TV cut of Mugen Train premieres in October, around the same time the new season starts in Japan. Entertainment District, then, begins on December 5 with an hour-long opening episode.

Tanjiro and crew return with the premiere of the Demon Slayer: Mugen Train Arc on October 10!

Check out all the new info that just got announced, including more details on Demon Slayer: Entertainment District Arc 🔥 https://t.co/kRsITkHs4v @aniplexUSA @DemonSlayerUSA pic.twitter.com/vU2syq3nwR

For more animation to watch in the meantime, why not check out the best animated series of all time. 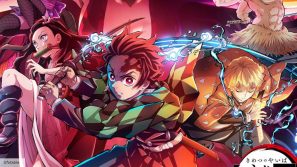 Demon Slayer season 2 release date, trailer, plot, and more
Get involved Continue the conversation over on The Digital Fix Forum