Wheel of Time may have only just started streaming on Prime Video, but filming on the second season is already half completed. Amazon Studios have reported a strong opening for the fantasy series, and are leaning further into genre – with the continuation of The Boys, the upcoming Lord of the Rings series and an adaptation of Mass Effect.

“We can firmly say that Wheel of Time was the most watched series premiere of the year and one of the Top 5 series launches of all time for Prime Video,” Amazon Studios head Jennifer Salke told Deadline about the debut.

Prime Video, like other streamers are “trying to figure out how transparent we are going to be in the future” with ratings. Salke says that “there were tens and tens of millions of streams” for The Wheel Of Time in the first three days of its release, with the US, India, Brazil, Canada, France and Germany as the top countries where it was a hit.

Genre has emerged as a key programming area for the streamer and a continuing development focus. One of the company’s newest hopefuls in the arena is Mass Effect. Amazon Studios is nearing a deal to develop a series based on the best-selling sci-fi video game franchise from Electronic Arts.

Computer game adaptations are currently a hot property for TV, with the highly-anticipated Halo coming to Paramount Plus early next year.

With the first season of Wheel of Time only being six episodes, but based on a 14-book series, further seasons were always going to be on the cards. But Amazon’s confidence in the success of the show has been proved by them cracking straight on with the filming of season 2.

According to Collider, shooting for Season 2 began in Prague, Czech Republic in July, where the show is still currently filming. The next season will be seeing many returning faces and characters from the first season, though it was previously announced that Barney Harris, who will be playing the character of Mat Cauthon in Season 1 of the upcoming series, will not be returning for the second season and will be replaced by Dónal Finn.

Salke said; “It’s a testament to everyone involved in the series – the incredible cast, led by Rosamund Pike, and our showrunner Rafe Judkins, and the entire team, who took viewers on a journey into a visually stunning world populated with diverse characters and cultures. It’s unlike any other fantasy series, and our customers all over the world are responding.” 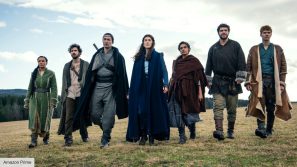