The first three episodes of epic fantasy series The Wheel of Time, starring Rosamund Pike, are now available on Prime Video. After today, there will be new episodes every Friday until the series finale on December 24, 2021.

While fantasy fans eagerly await the second seasons of The Witcher and Shadow & Bone (both on Netflix) and the hotly-anticipated Lord of the Rings TV series (which will be coming to Prime Video, home to The Wheel of Time), it looks like this new series will certainly hold us in its spell for the time being.

Based on a book series that was published between 1990-2013 and encompasses 14 volumes, the first season of The Wheel of Time is only six episodes, so there is potential for much more to come. A second season was confirmed before the first episode even aired.

The series draws on numerous elements of both European and Asian mythology, most notably the cyclical nature of time found in Buddhism and Hinduism. It was also partly inspired by Leo Tolstoy’s War and Peace (1869).

Set in an unnamed magical world, the series will follow Moiraine (Rosamund Pike), a member of the Aes Sedai, a powerful all-female organisation of magic users.

The trailer doesn’t show much beyond a general sense that the world is populated by magical beings and they are threatened by a “Dark One” and his army of orcs. Fans of the book series have made promise of cool creatures such as vampire pterodactyls – something we definitely hope turn up at some point.

The full trailer can be viewed below;

The Witcher season 2 will start on December 17, 2021 and we eagerly await more news about both Shadow & Bone and Lord of the Rings. It’s an exciting time to be a fantasy fan. In the meantime, check out our guide to the best fantasy movies. 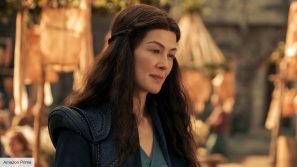