Venom: Let There Be Carnage has been an October hit and while it can still be found in most multiplexes, it has already crossed the $400 million mark worldwide. If you’re still hemming-and-hawing about whether to see it or not (we can’t imagine why), an extended preview, which shows the first 7 minutes of the film has been released on YouTube. The film is now available on digital rental too.

The footage starts with “in association with Marvel” – a reminder that Venom, along with characters such as the X-Men and Deadpool could soon be starting to bleed into the MCU. Check out our guide to all of the Marvel Easter Eggs in Venom: Let There Be Carnage that you may have missed.

There is then a prologue set in 1996, involving younger versions of Woody Harrelson, Naomie Harris and Stephen Graham’s characters. We then see Harris’ character, Frances Barrison AKA Shriek, in a secure facility where the staff have to wear protective gear over their ears in order to approach her.

We are then finally reunited with Eddie Brock (Tom Hardy), who is discussing Cletus Kasady (Harrelson) with Detective Mulligan (Graham).

And then we get our first glimpse of the symbiote we’ve all come to see – Venom himself – as he tries to eat Mulligan. Eddie has to pull him into a bathroom, where Venom gets philosophical; “man should never consent to crawl when he has the impulse to fly.”

The critical consensus on Rotten Tomatoes reads; “A sequel aimed squarely at fans of the original’s odd couple chemistry, Venom: Let There Be Carnage eagerly embraces the franchise’s sillier side.”

So, if you haven’t checked out the rom-com of the year, what are you waiting for? 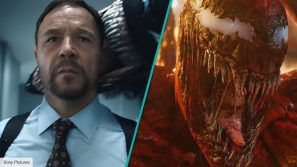