The elves are leaving Middle-earth, by which we mean New Zealand, but they’re not sailing to Valinor; they’re coming to the UK. Yes, Amazon has announced that the second series of their upcoming Lord of the Rings TV show will film in Britain rather than New Zealand, where the first season and Peter Jackson’s fantasy movies were shot.

“We want to thank the people and the government of New Zealand for their hospitality and dedication and for providing The Lord Of The Rings series with an incredible place to begin this epic journey,” Amazon Studios co-head of TV Vernon Sanders said. “We are grateful to the New Zealand Film Commission, the Ministry of Business, Innovation and Employment, Tourism New Zealand, Auckland Unlimited, and others for their tremendous collaboration that supported the New Zealand film sector and the local economy during the production of season one.”

The decision to relocate Middle-earth came as a surprise to the New Zealand government. They’ve been very accommodating to the billion-dollar TV series, offering huge tax rebates and financial incentives to keep the production in New Zealand. Unfortunately, it was all for nought, and the economic development minister Stuart Nash said it was disappointing for the local film industry.

Amazon will continue with production in New Zealand until June next year, but they’ve said they do not plan on taking further advantage of the financial incentives offered by the government. The New Zealand government has faced criticism in recent months for the decision to “bend over backwards” to accommodate one of the world’s wealthiest companies.

Nash explained that season two will be filmed in Britain as part of a strategy by the streaming service to “consolidate its footprint in the UK”. It probably helps as well that the UK offers its own rebates and financial incentives to studios, and Amazon already films several high profile productions here, including Good Omens.

New Zealand’s stringent Covid-19 policies have also probably played a part in the decision. The government has effectively shut the county’s border, and they’ll remain closed until at least the end of the year. This is obviously a problem for a TV series on a tight deadline. If the show hopes to avoid further potential delays, it makes sense to move to a country with less stringent lockdown measures in place.

Amazon’s Lord of the Rings series will hit Amazon Prime on September 3, 2022. To sign up for Prime video and get a 30-day free trial, click our affiliate link here. 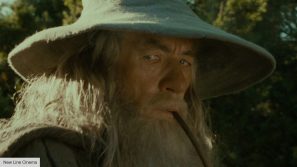