When you make one of the best movies of all time, you need something to remember the experience, so the cast of The Lord of the Rings got matching tattoos. When the members of the Fellowship finished shooting the first Lord of the Rings movie, they all hit the tattoo parlour, as you do.

The Lord of the Rings trilogy offers not just some of the best fantasy movies ever made, but rank as one of the greatest collection of movies ever committed to the silver screen. The series of epic action movies are impeccably translated from J. R. R. Tolkein’s original literary works, and the movies based on books are a movie-making miracle, a story that no one ever expected could be brought to life in a film.

At the premiere of the 2000s movie, cast members such as Viggo Mortensen, Sir Ian McKellen, and the Hobbits all shared the story of how they went to get an Elvish tattoo to celebrate their cinematic achievement and commemorate their sense of brotherhood.

“We felt the experience was both wonderful enough and profound enough to have ourselves branded,” Elijah Wood said. “So we went ahead and did that about a week before we finished.”

“We all got the word nine in Elvish. I visited the tattooist a couple times, but I didn’t say anything about Ian McKellen or whoever may be coming in,” Mortensen explained. “We all met one morning and it was an interesting event, and I enjoyed it. Actually everyone showed up. It goes along with all the other scars we got!”

Each member of the Fellowship got the same tattoo, and director Peter Jackson even got a tattoo for the word ten. But one Lord of the Rings character didn’t play ball.

John Rhys Davies, who played Gimli, actually sent his stunt double to get the tattoo instead: “As I am a professional actor, whenever there’s anything dangerous or that involves blood, I sent my stunt double to do it.” 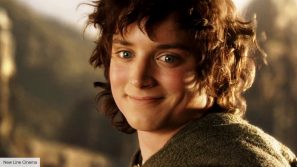