Matt Damon and Ben Affleck’s bromance almost went to the next level; unfortunately, fans won’t get the chance to see it. In an interview with Entertainment Tonight, the stars shared how originally there was a scene in the upcoming historical action movie The Last Duel that saw the two kiss. However, director Ridley Scott decided to scrap the actors’ first on-screen lip lock.

The Last Duel is a period piece set in 1386 that revolves around France’s last legally sanctioned duel. In one scene, we see Jean de Carrouges (Matt Damon) greet Count Pierre d’Alencon (Ben Affleck) by kneeling before him. However, according to both Damon and Affleck, this specific meeting initially was written to play out a little differently.

“In the original actual version of that scene — the way that ceremony actually took place was that you kissed everybody on the mouth,” Affleck said. Damon went on to explain: “That would’ve been our first on-screen kiss.” He continued, teasing that when it comes to a film showing the two finally locking lips, “it’s going to have to wait.”

Affleck also revealed that the drama movie’s director ultimately made the call to change the scene before filming took place, based on a gut feeling. “Ridley [Scott] thought it would be distracting,” he said. “And his instincts are pretty good.”

Although we haven’t seen the two kiss, Affleck and Damon have been close friends in the industry for nearly three decades. The Last Duel marks the two’s return to writing together since their collaboration in the 1997 thriller movie Good Will Hunting. Joining them as a co-writer for The Last Duel is Nicole Holofcener (Enough Said).

The Last Duel is set to release in theatres across the UK and US on October 15. 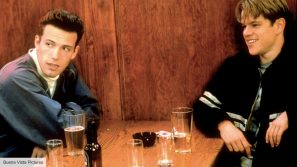