Chris Pratt has teased fans with an “amazing” first look at the Super Mario Bros movie on his Instagram. There’s just one problem; there’s no footage from the upcoming kids movie yet, so Pratt had to improvise.

Pratt (or the person who runs his socials) has taken a scene from the end of the MCU’s Guardians of the Galaxy, where his character, Star-Lord, grabs the Power Stone before bad guy Ronan the Accuser can get his greasy Kree mitts on it. In this version, though, Star Lord’s wearing Mario’s iconic red cap and the Infinity Stone has been replaced with one of the Mushroom Kingdom’s iconic gold stars.

It’s a funny little clip that puts Gamora in the role of Mario’s mushroom mate Toad and Meredith Quill (Star Lord’s mum) as Princess Peach. Pratt’s fans loved the video, with some demanding that the scene be included in the upcoming Mario animated movie. The general positivity towards the clip stands in sharp contrast to the reaction to the news Pratt had been cast as Mario.

To say the internet was displeased with the news that Pratt was playing Mario would be an understatement. Social media, specifically Twitter, lit up following the reveal, with most bemoaning the fact that Pratt had been chosen to play Japan’s most popular plumber. However, none of the cast really escaped the withering eye of the Mario fandom.

It wasn’t just the fans who were annoyed at the Mario Bros cast. John Leguizamo, who played Luigi in the live-action Super Mario Bros movie (one of our best family movies), tweeted about the lack of Latin-American representation in the film.

“So glad Super Mario Bros is getting a reboot! Obviously, it’s iconic enough,” he tweeted. “But too bad they went all white! No Latinx in the leads! Ground-breaking colour-blind casting in original! Plus, I’m the only one who knows how to make this movie work script-wise!” 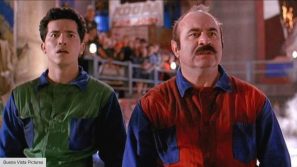