One of the more interesting plotlines in Succession is the off-kilter romance Kieran Culkin’s Roman Roy, and J Smith-Cameron’s Gerri. Cameron says she wasn’t a fan at first, but now sees what it adds to the TV series.

“I was completely thrown by the idea that there was gonna be some kind of liaison between Gerri and Roman. When they first told me that, I was like, ‘What?! This is a horrible mistake’,” Cameron told Collider. “And then, I thought, ‘Well, that’s probably what Gerri thinks too.’ There are no mistakes, really, you just have to think of clever ways out of them.”

In the show, the two become romantically involved through some raunchy role-play. No description would really do it justice, you need to watch it to understand exactly what we mean, and it provides some very fascinating insight into either character and their motivations. Cameron recognises that this could lead to some interesting results. “It’s more and more frustrating for me because, even if I were interested in having sex with Roman, my character is way too wise. She’s not the type to make that kind of mistake,” Cameron explains. “Things are coming to a boil. He’s pushing his agenda, and I’m pushing my agenda, and there’s some little unspoken thing that, in spite of ourselves, we’re getting attached to each other, in some kind of way.”

Their subplot is one of several in the currently running third season of Jesse Armstrong’s drama. As it stands, Kendall Roy has declared war with father Logan Roy, as family company WayStar RoyCo struggles under the weight of hefty workplace misconduct allegations.

Who gets the coveted CEO position from Logan is but the tip of the iceberg in the jet-black satire of rich lifestyles and corporate politique. We’ve yet to see how Gerri and Roman’s story continues, but we’re sure it’ll be quite something when it comes to the fore.

Succession is airing weekly on Sunday nights on HBO in the US, and on Sky Atlantic in the UK. 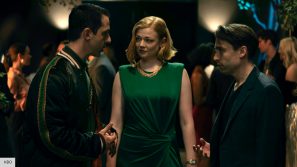 How to watch the next episode of Succession season 3 – where can you stream the HBO series?
Get involved Continue the conversation over on The Digital Fix Forum