The preeminent master craftsman of animation, Hayao Miyazaki, has given a rare, and lengthy, interview to The New York Times. And Toshio Suzuki, Studio Ghibli‘s producer and co-founder, has described Miyazaki’s ‘one last animated movie‘ for the studio as “a fantasy on a grand scale.”

In Miyazaki’s first interview with an English-language outlet since 2014, he says; “I believe that the tool of an animator is the pencil” – as he still hand-draws the majority of the frames in each film, numbering in the tens of thousands, himself. In 2013, Miyazaki retired and Studio Ghibli shut down its production department. But he is now making a new film, aged 80 “because I wanted to.”

Miyazaki says, of his characters, including Porco Rosso; “We must treat every character respectfully. We must love their foolishness. One common mistake — the belief that to draw a cartoon is to draw someone sillier than oneself — must be avoided at all costs.” The mission of his films, he says, is to “comfort you — to fill in the gap that might be in your heart or your everyday life.”

According to the New York Times: Suzuki is urging Miyazaki to finish his new film, which has thus far taken four years. Suzuki says that when Miyazaki came to him just over a year after retiring to say he wanted to make another film, “I was like, ‘Give me a break.'” He tried to talk him out of it, suggesting that Miyazaki’s best work was behind him. Ultimately Suzuki caved in because, he says, “The whole purpose of Studio Ghibli is to make Miyazaki films.”

Neither Miyazaki nor Suzuki will share much about the forthcoming film, beyond the fact that it is based on How Do You Live?, a 1937 novel by Genzaburo Yoshino.

The story concerns a 15-year-old boy in Tokyo, small for his age and fond of mischief, whose father has recently died. In the English translation by Bruno Navasky, published in October, the boy gazes out at the city and is overwhelmed: “The watching self, the self being watched, and furthermore the self becoming conscious of all this, the self observing itself by itself, from afar, all those various selves overlapped in his heart, and suddenly he began to feel dizzy.”

The actual content of the film could be anything — Suzuki has described it as “fantasy on a grand scale” — since Miyazaki doesn’t so much borrow stories as liberate them from their origins. All Suzuki will share is that he recognises himself in one of the characters, who is not human.

Anticipation for Miyazaki’s next – and final – masterpiece could not be higher. We only hope it doesn’t take another four years. In the meantime, check out our  guide to the best anime movies of all time. 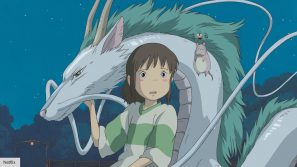 Spirited Away at 20: Studio Ghibli’s best movie takes us through the looking glass
Get involved Continue the conversation over on The Digital Fix Forum