Speaking exclusively to Empire, Star Wars: Ahsoka writer Dave Filoni has said; “It’s thrilling, I gotta tell you.” Ahsoka is a beloved character from the Clone Wars and Rebels animated series and the live-action version of her character, played by Rosario Dawson, was debuted in The Mandalorian. She is now getting her own spin-off series.

“It’s something you imagine doing for a long time. And then it’s kind of startling when you’re sitting there, and now you have to do it. I thought of this adventure for Ahsoka for a long time, and it’s interesting to see how it’s evolved,” he says.

“Years ago, I never would have imagined that it was sprung from a branch of a tree that had anything to do with a guy [like] Din Djarin (Pedro Pascal), or a child that looks like Yoda. It’s a great lesson for me on how, when you have other creatives like Jon Favreau, they can help lend such dimension and depth to what you’re doing.”

Ahsoka grew up as Anakin Skywalker’s Jedi Padawan, and grew in complexity with every passing season of the Clone Wars and Rebels shows. Even if you’re not that familiar with the animated series, she has such a distinctive look, she has become a well-known figure within the Star Wars canon.

“Chapter 13: The Jedi,” the Mandalorian episode in which Ahsoka appears, was written by Dave Filoni, who was the supervising director of The Clone Wars and spent years developing her character. After The Clone Wars was canceled, he snuck her into his new show, Rebels, and then did the same with The Mandalorian, on which he is a writer, director, and executive producer.

Ahsoka is known for her dual white lightsabers and her distinctive head/hair. On top of her head are actually her lekku, basically fleshy tails. Her species, Togruta, has them, and so does another famous Star Wars species, the Twi’leks.

Star Wars fans will be very keen to find out where the spin off show takes her, but we have The Mandalorian season 3 and The Book of Boba Fett coming to Disney Plus before Ahsoka. And let’s not forget Obi-Wan Kenobi too. An exciting time to be a Star Wars fan. 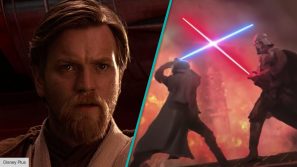