Star Trek leading man William Shatner might be about to become the oldest person to ever visit space. According to TMZ, Amazon’s own Jeff Bezos is taking the 90-year-old actor – who played the iconic Captain Kirk on the sci-fi series – on a 15-minute ride into space for a new documentary movie.

Shatner won’t be blasting off in the Enterprise, though. He will reportedly be riding on the Blue Origin rocket, the same vessel that took Bezos to space earlier this year. If Shatner actually does make it into space, he’ll become the oldest person to ever visit the cosmos. The record is currently held by 82-year-old former test pilot Wally Funk who joined Bezos on board Blue Origin’s first crewed suborbital flight this July.

Now, it’s worth pointing out that neither Shatner nor Blue Origin has confirmed this news, so take this story with a generous pinch of Klingon salt. Sources tell TMZ that Shatner was negotiating with Discovery to make a documentary that would see him travel to space, but those plans fell through, and streaming service Amazon Prime is now taking on the project.

While Shatner would be the first living member of the original Star Trek cast to visit space, he won’t be the first of them to boldly go where no man has gone before. After he died, a portion of James Doohan’s, who played engineer Scotty on the TV series, ashes were sent to space onboard a memorial flight to space on the SpaceLoft XL rocket in 2007.

Subsequently, astronaut Richard Garriott smuggled some of Doohan’s ashes onboard the International Space Station, and they remain onboard hidden somewhere on the Columbus module. 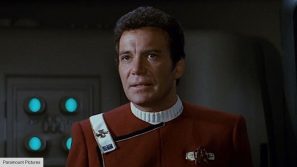