The South Korean Netflix TV series Squid Game has recently taken the world by storm, and fans are anxious for news about the next chapter in the story. Reportedly the series is the streaming service’s most-watched show to date, and a Squid Game season 2, seems to be inevitable at this point. However, series creator Hwang Dong-hyuk isn’t in a hurry to make the new instalment and even has another project in mind.

In an interview with The Guardian, the director confirmed that ‘talks’ between himself and Netflix are currently underway for the next season of Squid Game. “Of course, there is talk,” he said. “That’s inevitable because it’s been such a success. I am considering it. I have a very high-level picture in my mind, but I’m not going to work on it straight away.”

“There’s a film I really want to make,” the director continued. “I’m thinking about which to do first. I’m going to talk to Netflix.” So, although it seems like Squid Game season 2 is very likely a done deal, fans may have to wait a while before they get a chance to see the next chapter in the tense thriller.

The director will probably have his hands full with the film (if he makes one), and won’t have the capacity to plan the new season simultaneously. Squid Game season 1 was a demanding endeavour, and its follow up will undoubtedly require just as much work. “It was physically, mentally and emotionally draining,” Hwang Dong-hyuk said. “I kept having new ideas and revising the episodes as we were filming, so the amount of work multiplied.”

Season 1 of Squid Game followed a group of people with massive debts competing in deadly children’s games for a cash prize. Previously Hwang Dong-hyuk hinted that season 2 would feature more police involvement as the deadly games continued. However, no other plot details have been disclosed just yet. Stay tuned for updates.

Squid Game is available to watch exclusively on Netflix. If you are after more binge-worthy shows, here is our list of the best sci-fi series. 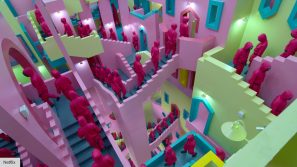