In the run-up to Rick and Morty’s season 5 finale, we were introduced to live-action versions of the wacky characters, with Christopher Llyod (Back To The Future) as Rick Sanchez and Jaden Martell (It) as Morty Smith. However, it turns out that the role of Morty was first offered to the titular star of the famous Harry Potter movies, Daniel Radcliffe.

Warner Media senior vice president of action and anime Jason DeMarco took to Twitter to congratulate the cast and crew after the sci-fi series’ season finale. Under the original post, he wrote a surprising admission of how he initially wanted Radcliffe for the role of Morty. DeMarco tweeted: “I originally wanted Daniel Radcliffe as Morty, because I know he’s a huge fan, but he (wisely) turned us down. A wise man. It was an idea that sounded good on paper but wouldn’t have worked at all.”

Radcliffe became a household phenomenon after starring as the leading actor in the fantasy movies Harry Potter back in 2001. He is also, as DeMarco mentioned, a self-proclaimed fan of the animated series. However, fan or not, Radcliffe still turned down the offer to star as Morty, and as DeMarco said, he is a “wise man” for doing so.

Casting the 32-year-old Radcliffe as a whiny teenager probably wouldn’t have worked. Especially next to Christopher Llyod, who is the perfect and age-appropriate choice for a live-action version of Rick Sanchez. The strangely aged grandfather grandson duo would have undoubtedly caused more questions than laughs. At the end of the day, having the young star Martell, known for his performance in the horror movie It, take on the role of Morty was the right call.

I originally wanted Daniel Radcliffe as Morty, because I know he’s a huge fan, but he (wisely) turned us down. A wise man. It was an idea that sounded good on paper but wouldn’t have worked at all😂

Daniel Radcliffe is yet to respond to DeMarco’s tweets, or clarify why he turned down the chance to appear on the TV series. However, after hearing that he and DeMarco are in conversation, we are curious to see if the star will make a guest appearance in Rick and Morty season 6, which is expected to release sometime in 2022. Stay tuned for updates.

In the meantime, here are some binge-worthy shows for you to enjoy with our lists of the best TV series on Netflix and the best anime series of all time. 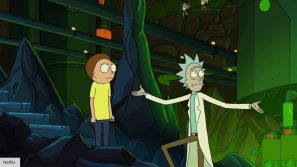