Can you smell what The Rock is cooking? Well, if you detected more festive notes than usual, it might be because Dwayne Johnson is about to star in his first Christmas movie. Yes, it seems that despite being Hollywood’s hardest working man, Dwayne’s never got round to starring in a Christmas film before now.

Dwayne will star in and produce Red One, a holiday action–comedy, for Amazon. Based on an idea from Hiram Garcia, president of production at Johnson’s production company Seven Bucks, the script is being handled by Chris Morgan, who recently penned Fast and Furious spin-off, Hobbs and Shaw. The film’s scheduled to start shooting in 2022 and will be released in time for Christmas 2023.

Exact plot details are scarce, but Red One’s been described by Seven Bucks as a “globe-trotting, four-quadrant action-adventure comedy” which imagines “a whole new universe to explore within the holiday genre”. Garcia has also said that Red One is a story he’s wanted to tell for years, describing it as an “epic, edge of your seat, action-adventure that takes beloved holiday mythology and turns it on its head.”

The partnership between Seven Bucks and Amazon seems to be part of the streaming service’s effort to capture a more populist audience. In an effort to compete with newer streaming services, Jennifer Salke, the head of Amazon Studios, has programmed not only awards contenders – like Manchester by the Sea and Brad’s Status – but also broader, more popular movies like Borat 2, Coming 2 America, and Without Remorse.

“Hold my Mana, because this is exciting. Our Seven Bucks is very bullish on our partnership with Amazon Studios; underpinned with some innovation, some pioneering and a lot of positive energy and passion,” The Rock wrote in a press release. “I’ve been very impressed with Jen Salke and her team’s vision and ambition to create an enormous, fun and unique ‘Red One’ holiday universe for families around the world to enjoy.”

Dwayne describing a “Red One holiday universe” suggests that both Amazon and Johnson see this as a new potential franchise, not just a one-off Christmas movie. Salke herself has said that Red One is just the first step in what she knows will be a successful, collaborative venture between Amazon and Seven Bucks, so who knows, maybe this is the start of an exciting new holiday tradition. 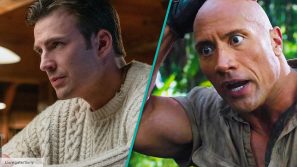