Quentin Tarantino launched an impassioned defence of the theatrical experience explaining why he believes cinemas are still important. Tarantino made his earnest declaration during an appearance on The Late Show with Stephen Colbert, during which he outlined the difference between watching a movie on TV and in the cinema.

Tarantino explained that while “TV is good”, he believes the experience is, ultimately, “disposable” compared to the shared joy of seeing a film in the theatre with an audience.

“When a movie comes out that you’re interested in enough to see and it makes you leave your house and buy a ticket, and you can do anything you want in the world that night, but you decide to see a film,” he explained. “One film, in particular, and maybe you’re on your own, or maybe it’s in the afternoon, and you’re on a date or it’s with your wife or whoever, and you go and see it. And you buy a ticket, and you sit down and you have an experience with a bunch of strangers.”

While it might be a slightly romanticised view of the cinematic experience, Tarantino has a point. Some of my favourite movie memories come from watching a film in a packed auditorium with fellow film fans.

Quentin Tarantino makes the case for why people should still go to theaters to see a new movie release. #LSSC pic.twitter.com/McpkrDiDcw

There’s the time I saw A Quiet Place in a deathly silent theatre, and the entire audience jumped as one when someone couldn’t contain a cough. Then there’s the rapturous shared laughter of watching the bonkers Malignant. And I’ll never forget for as long as I live the cheers from the crowd when Captain America lifted Mjolnir and proceeded to play a game of whack-a-mole with Thanos’ head.

Thankfully it doesn’t seem like Tarantino has to worry about cinemas going extinct anytime soon. While they’re feeling the pressure from streaming services and Covid-19 restrictions, the 2021 box office has been surprisingly healthy.

Deadline reports that the global box office has already hit $21.6 billion with two months left on the year. While that total isn’t quite as impressive as something like 2019’s absurd $42 billion takings, it shows that things are recovering faster than analysts originally predicted.

If you love movies, check out our list of the best movies of all time, or if you prefer the small screen, we’ve got a guide for the best TV series as well. 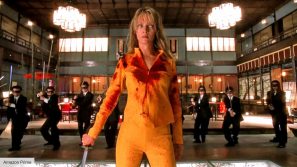 Kill Bill 3? Quentin Tarantino: “Why not?”
Get involved Continue the conversation over on The Digital Fix Forum