Just when you thought it was safe to go back in the jungle, they announce they’re filming a new Predator movie. In an interview with Collider to promote Jungle Cruise, producers John Davis and John Fox said that director Dan Trachtenberg has nearly finished shooting his new Predator film. Apparently, the film is titled Skull and will be a prequel to John McTiernan’s 1987 action movie classic.

“It goes back to what made the original Predator movie work,” explained Davis. “It’s [about] the ingenuity of a human being who won’t give up, who’s able to observe and interpret, basically being able to beat a stronger, more powerful, well-armed force.”

Davis revealed that Skull would feature a female hero, although he refused to say when or where the science fiction movie would be set. Meanwhile, Fox compared the movie to Alejandro González Iñárritu’s The Revenant, a movie about a man who struggles to survive in the great American wilderness after losing a fight with an angry bear.

Both Fox and Davis were extremely enthusiastic about Trachtenberg’s “unique” vision for this new Predator film, calling it fresh, cool, and interesting.

They can’t say, however, whether the movie will honour the original’s legacy and be R-rated or if it’ll instead go for a PG-13 rating in the hope of getting that mass appeal movie. Davis admitted the film was initially conceived as an R-rated project but added: “It could easily end up PG-13”.

Despite the film nearly being finished, don’t expect to see any promo materials for a while yet. The alien movie doesn’t even have a release date scheduled yet, so we’re probably a while off a trailer or even a poster. While we wait, why not check out our guide on how to watch Predator’s sister franchise Alien in order? Maybe the alien hunter makes an appearance over there… 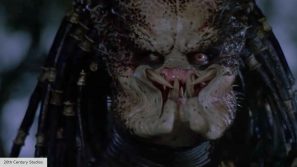