For many, Pixar is a synonym for a quality animated movie. We know the team over in Emeryville agonise over every story and artistic decision to ensure the quality of each Pixar movie (not now Good Dinosaur haters). Despite this, though, the team are only human and every now and again, a mistake slips through.

One supposed mistake is a ‘plot hole’ in the criminally underrated Ratatouille. For years now, pedants and online commentators have pointed out that the family movie’s  Disney villain – the snooty head chef Jonah Robert Skinner – is actually in the right. After all, you’d have to be the owner of a particularly strong stomach to enjoy food cooked by a rat we literally see living in the sewer.

Ratatouille star Patton Oswalt though has made it clear that Pixar was well aware of this potential ‘plot hole’; they just hoped no one would notice it. Oswalt made his tongue in cheek admission on Twitter this weekend when a user pointed out that “the [Ratatouille] villain wasn’t even evil; he just didn’t want food cooked by rats?!?”

Spotting the tweet Oswalt retweeted in all caps, “Dude, shut up, we didn’t think anyone would notice that plot hole we’re not giving the Oscar back.” Oh, Patton, you’re a nerd. You really shouldn’t have underestimated the internet’s incredible skill for quibbling and nit-picking.

DUDE SHUT UP WE DIDN'T THINK ANYONE WOULD NOTICE THAT PLOT HOLE WE'RE NOT GIVING THE OSCAR BACK https://t.co/o3y5HCnovk

One group that didn’t spot the plot hole was The Academy. As Oswalt pointed out, Ratatouille won the Academy Award for Best Animated Feature and was nominated for several more. Or maybe they did spot it, and they just didn’t care, which is the correct response for the record. 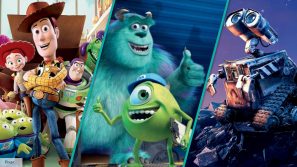 The best Pixar movies – from Monsters Inc. to Ratatouille
Get involved Continue the conversation over on The Digital Fix Forum

{"schema":{"page":{"content":{"headline":"Patton Oswalt admits Ratatouille has a ‘plot hole’ but jokes they’re not giving back the Oscar","type":"news","category":"pixar"},"user":{"loginstatus":false},"game":{"publisher":"","genre":"Animation","title":"Pixar","genres":["Animation","Family","Disney Plus","Movies"]}}}}
We sometimes include relevant affiliate links in articles from which we earn a small commission. For more information, click here.
Trending in Movies