M. Night Shyamalan is no stranger to twist endings or big plot reveals, which can be a wee bit mind-boggling at first glance. The Split director’s new thriller movie, Old, has another one of his convoluted reveals, a couple of conspiracies, and some scientific explanations that, let’s be honest, can be a lot to take in. We understand the frustration of leaving a cinema with questions, so to avoid any confusion after you see the blockbuster, we decided to explain Old’s ending for your movie-going convenience. You’re welcome.

The movie centres around the Cappa family who go on a vacation to an idyllic resort that turns out to be a nightmare. Prisca and Guy are a couple on the verge of separation who decide to bring their children, six-year-old Trent and 11-year-old Maddox, on a final family holiday. However, things get strange when they are taken to a private beach with two other families, and soon find themselves abandoned by the van driver (played by Shyamalan himself). They discover that they cannot leave the cove and are horrified to learn that they are all ageing rapidly, seeing each other’s lives fleeting before their very eyes.

As you can imagine, there are plenty of questions that need answering here. Why did they get abandoned on the beach? What is the resort hiding? Or what is it about the sandy paradise that is causing them to age? Well, the good news is we are here to help, ready to untangle all of Shyamalan’s narrative twists and turns. However, please note that Old is a movie best experienced blind. To enjoy the movie you will want to go into the cinema knowing as little as possible. But if you’ve already seen the film or are impatient for some juicy details, then this is the right place for you. That being said, here is The Digital Fix’s official warning – spoilers ahead.

What happens in Old’s ending? 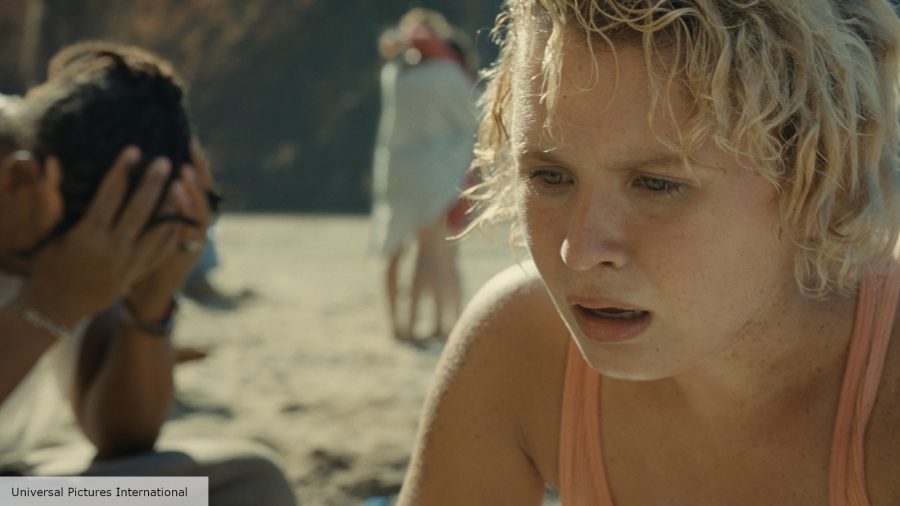 The mysterious beach in Old is a supernatural phenomenon that was discovered by the suspicious ‘resort’, and used for reasons that we will discuss later on. The sandy shore is surrounded by a cliffside of rocks which the families are told are rich with unnamed minerals. The rocks begin affecting the character’s very cells, with their ‘minerals’ acting almost as a catalyst for the ageing process – making everyone’s bodies deteriorate at super speed.

The beach is also near impossible to escape. When characters try to walk back the way they came, they end up fainting, unable to break free from the nightmarish paradise. This is due to the sudden change in their bodies, whose cells are currently working overtime. Think of a deep-water diver returning to the surface too quickly; the effect of trying to leave the beach is the same for the characters, as their bodies simply can’t adjust quickly enough to the sudden molecular change, forcing them to stay imprisoned. The characters begin to drop off like flies, falling victim to their illnesses, such as dementia, or even to themselves, as desperation drives them to the very brink of sanity.

However, not all is lost. Earlier in the movie, we saw a six-year-old Trent make friends with the resort manager’s nephew. His friend left him a coded message, which after the death of his parents, Trent decides to look over and try to decode. He succeeds and learns he and Maddox can swim to a nearby coral reef, which seems to counter the rocks’ effects, letting them escape at the film’s end.

What is Old’s twist, exactly? 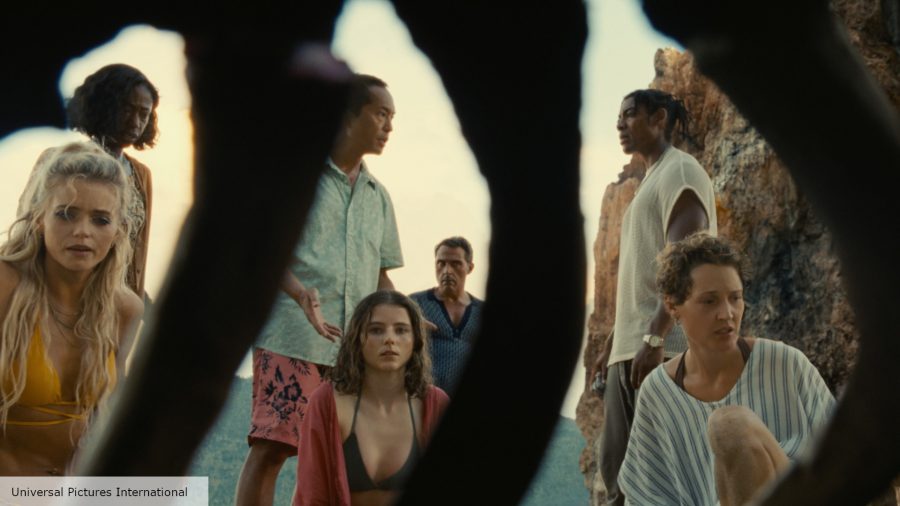 Now that you know exactly what the beach is, the next big thing to unpack that Old’s ending revealed is what it was specifically used for. Shyamalan as the van driver, who first brought the families to the beach, is revealed (in a very meta way) to have been filming their actions and monitoring everything that happened. When Maddox and Trent disappeared from his sight (currently trying to untangle their swimsuits in the coral reef), he assumes that no one is left on the beach and informs the resort that the experiment is done. Yep, you read right, experiment.

It turns out that the resort is actually a front for a pharmaceutical company that uses the beach to test new medication. They target families who have an illness, tempt them with a luxury vacation, and then use them as test subjects for their latest medicines, observing a lifetime’s worth of data about their new products in a single day.

At the beginning of the movie, we saw the family being greeted with a cocktail, specifically made based on their preferences. It turns out that the drink was actually a blend of medicine that would be trialled on them and observed once they were trapped on the beach. Basically, they were oblivious human guinea pigs, yikes.

During the movie, there was actually a breakthrough. Even though the majority on the beach died, it is revealed that the welcome cocktails did prevent one of the test subjects, a woman with epilepsy, from having a seizure for 16 years in spooky beach time. But regardless of their ‘success’, their killer operation comes crashing down when it is revealed that Trent and Maddox managed to escape from the deadly cove, having successfully swam through the coral, and are now ready to hold everyone accountable.

Why Trent is the movie’s hero 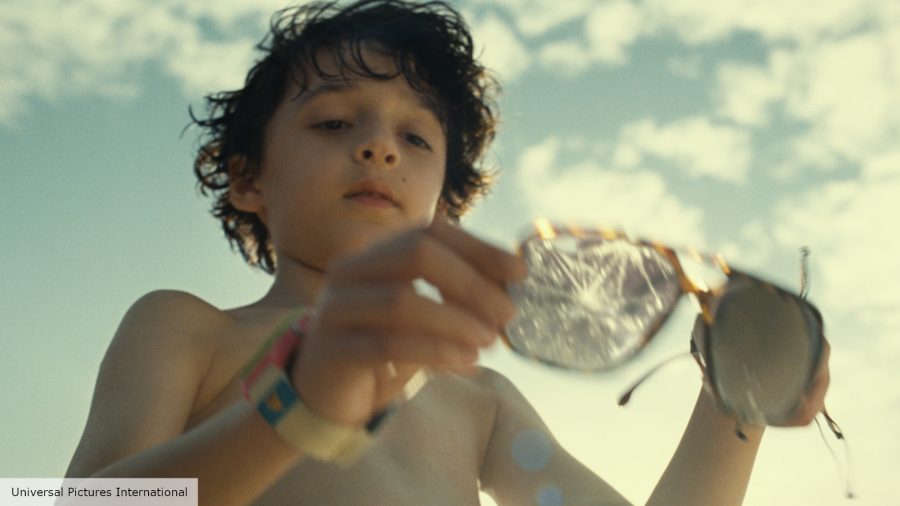 Earlier in the movie, we see Trent going around the resort asking random people about their professions with a new friend he made earlier that day, the manager’s nephew that left him the lifesaving note to decode. It may seem like a silly detail to keep taps on, but Trent’s general inquisitiveness plays a massive part in the movie’s twist.

At the start of the movie, one of the people he asked the question to turned out to be a cop. At the end of the film, having escaped the cove, we later hear the adult voice of Trent approaching the same cop we met at the beginning of Old. Trent hands over a diary that he found on the deadly beach, which has listed all the pharmaceutical company’s victim’s full names and home addresses. We see the cop making a call to his work to check the diary’s information, and soon finds out that every name can be traced back to a cold, missing person case. Needless to say, it is pretty much over for the resort’s evil ways.

Will there be an Old sequel? 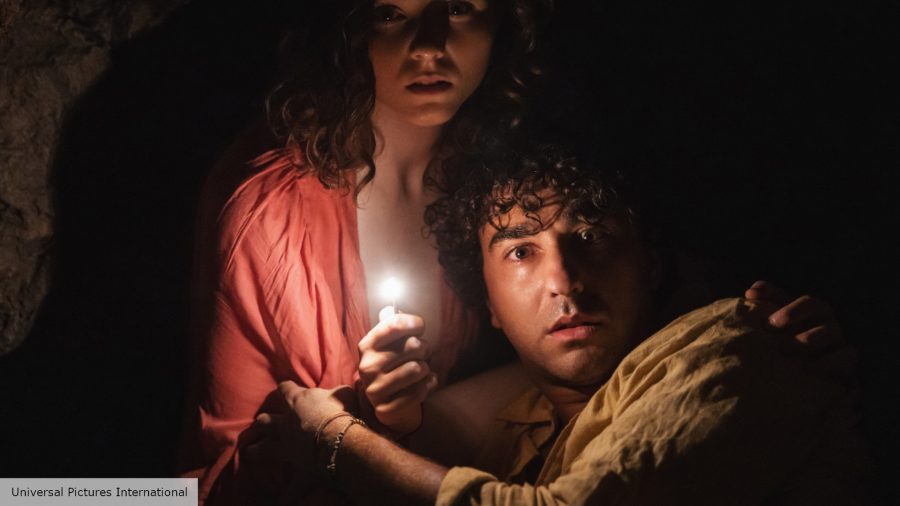 During the cop’s call, we see a new van load of test subjects being welcomed into the resort. But Trent and Maddox interrupt the greeting, spilling the medicated cocktails, and confronting the manager who had left them to die a day ago in front of everyone. They begin to expose the operation publicly, and the resort staff face the consequences as guests gather around to record the confrontation on their phones. Trent and Maddox are then swept away in a helicopter to safety as the hotel crashes and burns.

The two are told that justice would be served, and that the nefarious operation has been shut down. However, despite relief, there is a bitter aftertaste to this survival. Both are on their way to their aunt’s care, where they are worried about how she will react seeing them, as both are now middle-aged and are actually older than her, biologically at least. Viewers are left pondering this un-comfy realisation of stolen youth, and in some ways, despite making it out alive and closing the operation, Old’s ending can be considered tragic.

We are also left wondering if it is actually the last time we will see this beach. Yes, the operation has been shut down, but the beach still remains, and we are left wondering what the new knowledge of its existence will lead to now. The exact fate of the beach is left uncertain, and it seems to be left lying in wait for a new mastermind to exploit its power.

Whether its conclusion hints towards a sequel or not, one thing is certain about Old’s ending; it will be divisive to viewers. When we here at The Digital Fix reviewed the movie, we weren’t exactly its biggest fans. However, fan or not, who doesn’t love a juicy conspiracy mixed with some terrifying existential themes? If you are looking to scare yourself some more, why not check out our list of the best horror movies. 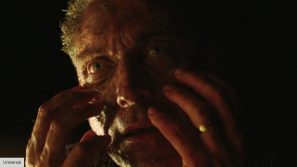