Ladies and gentlemen! If you wander down to the multiplex tonight, you’ll behold a sight so bizarre, horrifying, and monstrous that I warn you that those who suffer from nervous disorders, weak hearts, or predisposed to insomnia look away now because Nightmare Alley has come to town.

Yes, the monster movie maestro Guillermo Del Toro is back with his first movie since the Oscar-winning Shape of Water. This time though, he’s forgoing the explicitly supernatural and instead takes a look at something far scarier; the corrupting nature of greed. Bradley Cooper leads an all-star cast as Stanton Cooper, a wandering drifter who befriends the owner of a travelling carnival, Clem (Willem Dafoe).

Seeing potential in the wanderer, Clem offers him a job, and it’s not long before Stan is taken under the wing of the carnival’s clairvoyant Zeena (Toni Collette) and her alcoholic husband. The pair teach him the tricks of their trade, falling in love with fellow performer Molly (Rooney Mara) along the way. Stan eventually becomes a talented enough mesmerist that he’s ready to take his act out on his own, becoming wildly popular among New York’s wealthy elite.

Unfortunately, old habits die hard, and Stan’s constant need for more see him conspire with Dr Lilith Ritter (Cate Blanchett) to con his patrons by pretending to commune with the dead. Stan quickly learns that pretending to talk to people’s lost loved ones is a very dangerous game.

Staggeringly brilliant, in a pulpy penny dreadful kind of way, Nightmare Alley is a lavish slice of gothic Americana that, like a carnival freak show, delights in horrifying its audience. Ultimately, this story is a tragedy and a metaphor for how greed can warp a person into something literally monstrous.

There’s a degree of inevitability to the picture; from the moment we see Stan at the carnival, we know this story isn’t going to have a happy ending. That’s not to the film’s detriment, though. Instead, it inspires a sense of morbid curiosity in the audience, compelling them to stay until the end and see if their own psychic prognostications are as accurate as Stan’s are.

Speaking of Stan, Bradley Cooper is on blistering form here. There’s been some discussion that Nightmare Alley may be the start of some kind of Brad-aissance, I must confess I didn’t think Cooper’s recent output was that bad, but if he’s going to make more thriller movies like this, then I’m all for it.

Despite leading the ensemble, he pulls little focus from his co-stars, all brilliant. Cate Blanchett, Toni Collette, and Rooney Mara are, of course, the three standouts, and while Blanchett’s ice queen/femme fatale character will probably be most people’s favourite, it’s Mara who deserves your attention. She grounds the piece, which flirts with the fantastical, in a human story as she’s the innocent party who suffers the most at the hands of a corrupted Stan.

Still, if you pushed me to name my favourite member of the ensemble, I’d say Willem Dafoe’s Clem. He’s a character who’s a bit like circus popcorn, you know he’s no good, but you always want more.

I’d be remiss, not to mention the opulent production design. Not to name names, but so often in feature films these days, the grander sets are so obviously digital creations. Not so here; everything from the sets, props, and costumes have del toro’s fingerprints all over them. They’re so meticulously chosen and deliberate; it’s honestly fun just existing in the world he’s built.

Well, I say fun. It’s a rather dour place, think Albert Square meets Twin Peaks, there’s just something imperceptibly off with the world. The goth in me loved that, but I’m well aware that it won’t be for everyone. The characters and world are grubby and offputting, but if you can move past that and see the beauty in the macabre, you’ll have a lot of fun with Nightmare Alley, although we warn you now the credits are particularly disquieting. 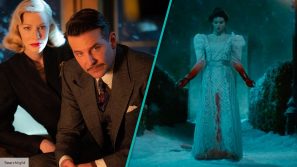 How to watch Nightmare Alley – can I stream Guillermo del Toro’s new movie?
Get involved Continue the conversation over on The Digital Fix Forum