The Indian sensation RRR is now streaming on Netflix, after a limited theatrical release in the US. The three-hour epic is a historical action movie, with musical sequences, and really needs to be seen to be believed. Though unfortunately, it’s been released with a Hindi dub, instead of in Telugu – the language it was made in.

RRR was initially a placeholder name – after the film’s director SS Rajamouli, and its two stars – NT Rama Rao Jr and Ram Charan. However, the title ended up sticking and has been changed to stand for: Rise, Roar, Revolt. It has broken several box office records in India.

The film is fan fiction, based on two real-life revolutionaries – Alluri Sitarama Raju (known as Ram in the film) and Komaram Bheem – and creates a fictional backstory in which the two meet and become friends in 1920. Bheem is a man on a mission to free a girl from his tribe that has been kidnapped by the British Governor of the region. Ram is a police officer tasked with tracking Bheem down, but they become friends before they know each other’s identities.

The movie features some spectacular sequences involving CGI animals, throwing motorcycles during battle, and more slow-mo action against fiery backdrops than you can shake a stick at. And there’s a whole lengthy musical sequence which could be its own brilliant music video.

The movie had a big budget compared to most other Indian films, which was needed for the historical production design and costumes, just for starters. The movie really works because of the two central performances, which completely sincerely sell you on this powerful friendship against the odds.

If you have the chance to see it on a big screen – it’s being re-released in the US for one day, on June 1 – you should take it, as it’s certainly a visual and aural feast. However, if Netflix is you’re only option, watching it at home also works! 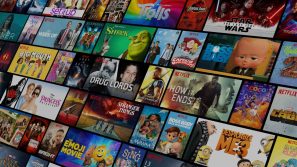