The Clerks director has been fielding questions from fans since Revelation’s trailer was revealed during Netflix’s Geeked Week. One commented on how inspired the show already feels, which Smith quote-tweeted to say that each episode contains a specific homage, and listed what movie pertains to what episode. Superman 2, Indiana Jones and the Temple of Doom, Batman, and, of course, 1987’s Masters of the Universe, each get a nod, and then horror movie Hellraiser. Hm.

Smith provided no other context than that, letting speculation run wild. Four of the five you can understand: Temple of Doom is a classic adventure movie, Batman and Superman loom as large outside of the DCEU as they do within it, and acknowledging previous He-Man iterations makes sense. But Hellraiser? That’s a bit of a wildcard choice. Not unwelcome, just unexpected, raising eyebrows before we’ve seen a full episode.

Masters of the Universe
Read next 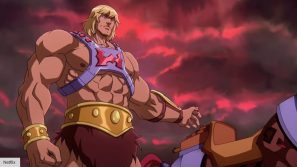 Masters of the Universe: Revelation trailer gives Netflix the power