Taika Waititi, who has his Thor four-quel Love and Thunder coming out in July, has expressed regret that Natalie Portman’s Jane Foster was not included in Thor: Ragnarok. Portman is making a triumphant return to the MCU as the Mighty Thor in the next movie, after last appearing in the franchise in 2013’s The Dark World.

One person who has been keeping track of when we last saw Jane is Thor himself, who knows it’s been “eight years, seven months, and six days” since their break up. In a red carpet interview with Variety from the premiere of Love and Thunder, Waititi said; “It was part of the comic run by Jason Aaron, and it was something that we were always in love with when I was working on Ragnarok. We were always talking about how cool that was. And part of me on Ragnarok really wished that Natalie could have been a part of that.”

While 2011’s Thor and The Dark World are not as critically-acclaimed or beloved as Waititi’s Ragnarok, Portman’s Jane, and her friends/colleagues Darcy (Kat Dennings) and Erik (Stellan Skarsgard) were one of the highlights. Waititi has considerably changed the tone of the Thor movies, making them much brighter and lighter – with the influences of 80s neon, hair metal (Immigrant Song, Sweet Child O Mine), and also making the scripts much more comedic.

The plot of Ragnarok took Thor away from Earth – first to become reunited with his “friend from work” – The Hulk, and then to battle his sister Hela (Cate Blanchett) over the fate of Asgard, with the help of Valkyrie (Tessa Thompson). Love and Thunder will be unusual for not featuring Tom Hiddleston’s Loki, and Waititi has played up the romance, saying it’s a big part of the movie.

While we wait for Thor: Love and Thunder to come out, check out our guide to where the Thor cast are now and the best Chris Hemsworth movies. 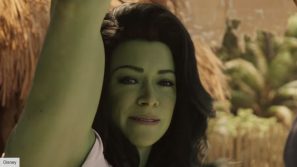 When is She-Hulk coming out?
Get involved Continue the conversation over on The Digital Fix Forum