Universal has released a five minute prologue to Jurassic World: Dominion as a teaser for the film, which will be released in theatres in Summer 2022. The short film had previously been shown exclusively before IMAX screenings of Fast and Furious 9.

The footage starts 65 million years ago and shows the origin story of ‘Rexy’ – the tyrannosaurus rex from the first two Jurassic World films. It starts with brachiosauruses, pterodactyls, ankylosauruses and triceratops – and an oviraptor (not seen in the Jurassic films previously) living their peaceful lives, basking in lakes and rivers.

The peace is interrupted by a violent clash between two predators – a giganotosaurus and a T-rex. The T-rex’s design has been updated to reflect the latest discoveries and evolving knowledge of paleontologists and the rest of the scientific community. The tyrannosaur is covered in a coat of fine feathers that make it look hairy.

Once the T-rex is unfortunately dispatched by the giganotosaurus, a mosquito lands on it and the rest, as the say, is history.

Director Colin Trevorrow has said; “Ever since I was a kid, I have wanted to see dinosaurs in their natural habitat. It may have taken a few decades, but with a little help from ILM, Universal and Amblin, it has finally happened. This preview is just a glimpse of the film we’ve made. It’s an epic celebration of everything Steven Spielberg and Michael Crichton created, and I can’t wait to share it with the world next summer.”

After the shot of the mosquito landing on the poor dead T-rex, the prologue cuts to 65 million years later. The T-rex’s descendent/clone is being stalked by a helicopter, as it runs free (after being released from the Lockwood Estate at the end of Jurassic World: Fallen Kingdom).

It stumbles across a retro drive-in movie theatre that is showing American Graffiti (made by Spielberg’s pal George Lucas, of course) and Flash Gordon – sounds like a great double feature. Rexy manages to allude the tranquiliser darts from the helicopter and live to roam free for another day. It ends with one of the pilots saying; “settle down kid, she can’t run forever.”

Giving a breakdown of the prologue to IGN, Trevorrow says; “She’s on the run and there’s a helicopter chasing her, and she just does not know what world she’s in. Being able to juxtapose the natural environment that we find her in, where she’s essentially on the run from the cops, I found to be such an awesome contrast.”

We can’t wait to find out what Rexy and the rest of her dinosaur companions’ fate will be when Dominion is finally released in the summer of 2022. While we wait, check out our guide to the best adventure movies. 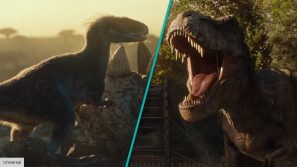 Jurassic World 3 release date, cast, and everything else we know
Get involved Continue the conversation over on The Digital Fix Forum