Dwayne ‘The Rock’ Johnson has always seems a bang up dude, and one of his co-stars on Jungle Cruise says he’s exactly what you’d expect. Chatting to us about the adventure movie, Edgar Ramírez was full of praise for the former pro wrestler.

“It was beautiful, to work with Dwayne is everything that you would imagine that it is,” Ramírez explained. “He strongly believes in collaboration, he’s a very compassionate guy, he’s very nice, he’s always offering a smile, to you and to everyone else. He’s a true leader, and it was really nice to work with him, I really grew very fond of him, he’s a very nice person.”

Ramírez went on to say the atmosphere on set for the Disney movie was playful and easy, leaving him with fond memories of the experience. “This is one of those movies that, regardless of how big and the scope of the film, we were really kids playing, because the whole process invited you to get immersed in the magic of making movies,” he says. “It was a lot of work, but quite honestly, all my memories are of going to the playground with my friends and just dreaming of characters.”

The fantasy movie, directed by Jaume Collet-Serra, follows captainn Frank Wolff (Johnson) and Dr Lily Houghton (Emily Blunt) on a treachorous journey in the Amazon for some mythological treasure. Ramirez plays one of the baddies, Aguirre, who’s hunting our daring duo, and Prince Joachim (Jesse Plemons) isn’t far behind.

Based on the Disney ride of the same name, Ramírez says making the film was an example of why he loves his work. “I’m really grateful for the opportunity that my work gives me to foster and protect my inner child, and I invite him to play every time,” he said. “I really like that about my job, and this movie was the perfect example of a beautiful playground.”

You can catch Jungle Cruise in theatres or on Disney Plus Premier Access from July 30. 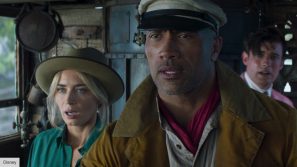