Keanu Reeves continues to be one of the nicest people in Hollywood. This time, he’s surprised the stunt-people of John Wick 4 with some nice Rolex watches worth $7,000 to celebrate wrapping.

The action movie finished principle photography recently, and Reeves, as the lead, decided to mark the occasion with some gifts for the crew. Bruce Concepcion, Li Qiang, Jeremy Marinas, and Dave Camarillo each received Rolex submariner time-pieces, with a personalised inscription. The instagram Watchmania has some pictures, one showing the back of Marinas’s piece: “The John Wick Five. Jeremy, thank you, Keanu, JW4, 2021.”

Marinas posted himself saying it was the “best gift ever”, and Concepcion put up a snap of him wearing his, writing: “Got that new new, thank you bro KR.” Aside from starring in a wealth of beloved science fiction movies, Reeves is famously kind and generous. there’s the time he bought ice cream so he could autograph the receipt for a fan, or the time he was caught on video giving up his seat on a busy New York subway. And then there’s the time he spotted a sign referencing his calling someone at E3 “Breathtaking”, and stopped to take a picture.

Reeves manages all this while keeping busy. Besides John Wick: Chapter 4, due next year from director Chad Stahelski, he has The Matrix Resurrections coming later this year.

Reeves is joined by a returning Carrie Anne-Moss, with Yahya Abdul-Mateen II, Jessica Henwick, Jonathan Groff, Neil Patrick Harris, Christina Ricci and more in the blockbuster. Lana Wachowski is directing, from a script by herself, David Mitchell, and Aleksandar Hemon.

John Wick 4 hits theatres May 27, 2022, while The Matrix Resurrections arrives December 22, 2021. We have the best thriller movies to keep you on the edge off your seat otherwise. 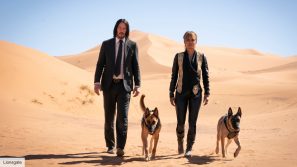