Lady Gaga has shared a new trailer for Ridley Scott’s House of Gucci with the legend; “A new trailer, sweeties.”

The trailer offers up more insight into Al Pacino’s character and further glimpses of Jared Leto (heavily disguised under layers of prosthetics).

A new trailer, sweeties 💋 #HouseOfGucci – only in theaters This Thanksgiving pic.twitter.com/4zVhazUo2N

The first trailer was set to Blondie’s Heart of Glass and the second continues the flavour of that era, with Eurythmics’ Sweet Dreams. This new trailer is packed full of FASHION (obviously), breath-taking hair and make-up and a cast with more Oscars than you can shake a stick at. Every single one of Gaga’s line deliveries is set to burn into the brain, including “it’s time to take out the trash” and “Don’t. Miss.”

This trailer sees Pacino’s Aldo Gucci being visited by the US treasury department while playing squash and Jared Leto’s Paolo Gucci emphasising the importance of family. But Lady Gaga is the undoubted star of the show, with Adam Driver barely uttering a word in this latest trailer. Gaga is coming for that Oscar!

The second trailer starts with Gaga’s Patrizia being introduced to a bunch of brawling Guccis and only escalates from there, ending on the immortal line; “I subscribe to unconventional punishments.”

Like any trailer, it’s so fast-paced and densely packed, there are many blink-and-you-miss-it moments. One that caught our eye was what looks like a younger version of Jared Leto’s character (therefore, without the prosthetics) walking the catwalk at one point.

Al Pacino’s Aldo seems much more in charge in this trailer and his role may be bigger than we first thought. The hierarchy appears to go Aldo (Pacino) – Paolo (Leto) – Maurizio (Driver), with Gaga’s Patrizia attempting to pull the strings of manipulation at every level.

Scott certainly seems to be leaning in to a campy, comedic tone with over-the-top melodrama baked into every performance. It is unbelievable that we are getting this in the same year as The Last Duel (from a director in his 80s, no less!). 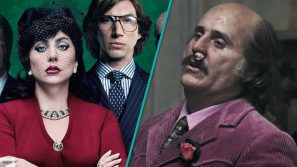