Jared Leto is no stranger to changing his appearance for a role, but his upcoming performance as Paolo Gucci may be his most mind-blowing transformation to date. The Dallas Buyers Club actor left fans baffled yesterday after sharing a first look at his altered appearance for the highly anticipated American thriller movie, House of Gucci.

Directed by Ridley Scott (Alien), and based on Sara Gay Forden’s 2001 book, The House of Gucci: A Sensational Story of Murder, Madness, Glamour, and Greed, the film follows the real-life events and aftermath of Maurizio Gucci’s (Adam Driver) murder, the head of a famous fashion brand. Leto plays Paolo Gucci, the former vice president and managing director of Gucci. Lady Gaga is also cast in the movie, playing Patrizia Reggiani, who served 16 years in prison for the murder of her husband, Maurizio.

Yesterday the Academy award-winning actor revealed a first look at his upcoming role via Twitter, sharing his official character poster for the movie to followers. His appearance shocked many, as Leto is almost unrecognisable in the pic. The poster revealed that in the film, Leto wears a fat suit, a bald cap, and has facial prosthetics, completely embodying the character – physically at least.

Fans were generally supportive in the comments, amazed by the new appearance. “Your eyes are the only part I recognise! Amazing job by the makeup artists!” One person tweeted. “Wow. What a transformation,” another wrote.

Your eyes are the only part of you I recognize! Amazing job by the makeup artists!!! pic.twitter.com/VV78hcKfgt

However, not everyone appears to be supportive of Leto’s appearance in the movie. Patrizia Gucci, a descendant of the company’s founding father Guccio Gucci, previously told the Associated Press that Leto’s casting in the movie was “horrible”, and offended her.

She has also publically criticised the actor’s co-stars, saying that Al Pacino is too “fat” and “short” to play her grandfather Aldo Gucci. Patrizia Reggiani also voiced her displeasure at the actors in the movie, criticising how Lady Gaga didn’t meet her before playing her in the film.

Whatever the backlash, we don’t have too long to wait to see Leto’s performance. House of Gucci is set to release on November 24 across the US, and on November 26 in the UK. 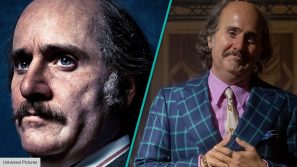