James Michael Tyler, who played Gunther in the comedy TV series Friends, has passed away at 59 from Stage 4 prostate cancer. Deadline reports that he died peacefully, and tributes have been coming in from his co-stars.

As Gunther, Tyler appeared in every season of Friends, often serving and talking to the main cast in Central Perk. His character’s affection for Jennifer Aniston’s Rachel was a recurring joke, as was his own extended past. It’s revealed Gunther is fluent in Danish, and was a struggling actor at one point. Aniston shared a tribute to Tyler on her Instagram after the new broke.

“Friends would not have been the same without you,” she writes. “Thank you for the laughter you brought to the show and to all of our lives. You will be so missed.” Courtney Cox, who played Rachel’s best friend Monica, said similar. “The size of gratitude you brought into the room and showed every day on set is the size of the gratitude I hold for having known you,” Cox shared on Instagram. “Rest In peace James.”

David Schwimmer, the actor behind Ross, Monica’s brother and Rachel’s love internet, also made a tribute. “James, thank you for playing such a wonderful, unforgettable role in Friends,” he said, “and for being such a big hearted gentleman and all around mensch off screen. You will be missed, buddy.”

Matt LeBlanc and Lisa Kudrow, who played Joey and Phoebe, made similar posts, thanking Tyler for being part of the ’90s TV show.

Tyler was part of the Friends reunion in May this year, though he only contributed via video call. The special is available on streaming service HBO Max in the US, and Now TV in the UK. Otherwise, you can find every season of Friends on Netflix. 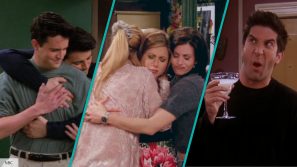