Vin Diesel wants Dwayne Johnson back in the Fast and Furious franchise. In an impassioned Instagram post, Diesel asked the action movie star to “fulfill” his destiny and return for Fast 10.

In the post, containing an image from Fast Five, Diesel tells Johnson that “the time has come”, pointing out that we’re all now waiting – eagerly – for the next Fast film. “As you know, my children refer to you as uncle Dwayne in my house,” Diesel writes. “There is not a holiday that goes by that they and you don’t send well wishes… but the time has come. Legacy awaits.”

He continues be pointing out this was his promise to “Pablo”, previous costar Paul Walker who passed away in 2013. “I swore that we would reach and manifest the best Fast in the finale that is 10!” Diesel states. “I say this out of love, but you must show up, do not leave the franchise idle you have a very important role to play. Hobbs can’t be played by no other.”

Johnson and Diesel’s feud has been well documented, spouting from an Instagram post the former made in 2016 while filming The Fate of the Furious. “Some conduct themselves as stand up men and true professionals, while others don’t,” Johnson wrote.

Since then, it’s become known that Diesel was the source of Johnson’s ire, with the two actors going their separate ways. Diesel remained as the leading man on the mainline Fast movies, while Johnson became part of the spin-offs Hobbs and Shaw, alongside Jason Statham. Johnson has said he won’t be coming back to the main Fast movies, either.

Will this post change anything? We can only speculate. Johnson has expressed regret over putting their feud in the public sphere, though he has also said he “laughed hard” when Diesel said he takes a “Felliniesque” approach to getting certain performances out of actors.

In any case, Fast 10 is due to hit theatres April 7, 2023, and if you want some Dwayne Johnson in your life, you can find him in Red Notice on Netflix November 12. 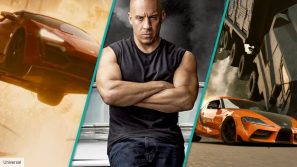 Fast and Furious movies in order: the Fast timeline
Get involved Continue the conversation over on The Digital Fix Forum