Abs aren’t easy, and no one knows this better than actor Chris Hemsworth. Having to be superhero ready for his performances in the Marvel Cinematic Universe as Thor, Hemsworth is no stranger to keeping fit, and is now on a new intense fitness regime for his next flick. The actor shared a video on his Instagram page, showcasing a pretty hardcore workout, as he gets ready for Netflix’s sequel to the action movie Extraction.

Back in 2020, Netflix’s Extraction premiered and saw Hemsworth play a hardened Black Ops mercenary named Tyler Rake, who is charged with protecting the son of a drug lord. With plenty of fight sequences and a fast-paced plotline, Extraction was a high stakes thriller movie, and judging from Hemsworth’s recent video, its sequel is looking to be just as physically demanding.

In the Instagram video, we see Hemsworth quickly go through his workout regime. He begins with boxing before moving on to sit-ups and push-ups. Finally, we see him do some core work, explaining how he maintains that six-pack. Along with the video, the star captioned the post, writing: “Gearing up for Netflix Extraction sequel. Transitioning from heavyweight training to a lot more bodyweight functional movements concentrating on agility, strength and speed.”

Hemsworth also attached the details of the workout for any fitness fanatics to take a crack at. Here is the actor’s latest fitness regime:

The first Extraction film broke records for the streaming service, becoming the most-watched original film in the platform’s history in its first four weeks. However, despite its streaming success, critically, it received a mixed reception and currently holds a 67% on Rotten Tomatoes. We are curious to see if this upcoming sequel will be able to outshine its predecessor.

Currently, no release date for Extraction 2 has been announced. However, filming is expected to begin this month in Sydney, Australia. In the meantime, you can see Hemsworth in full Norse God glory as he takes on the mantle of Thor once again in Thor: Love and Thunder, which is set to premiere on May 6, 2022. 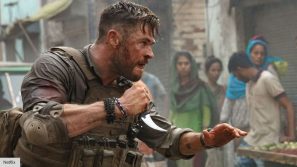