The upcoming Dragon Ball Super movie, due to be released in 2022, is set to feature “new production techniques” and “will be full of spectacular visuals,” according to producer Norihiro Hayashida in a statement released yesterday for Heroes’ 11th anniversary.

The DBS Chronicles Twitter account translated and released the message, which can be read in full here;

Also, he assures the movie will be “full of spectacular visuals” 👀 pic.twitter.com/Omf0wvWEw3

While little is known about the plot of Dragon Ball Super: Super Hero at the moment, a brief trailer released at New York Comic-Con earlier this month teased the (inevitable) return of Broly, as well as the Red Ribbon Army. New characters include Gamma 1 and Gamma 2, who may be the story’s villains.

While the teaser is less than a minute long, every frame has been studied to discover character clues and plot details. Gamma 1 and Gamma 2 appear to be twin-like grey aliens wearing uniforms, but their purpose remains unclear.

As well as new characters, more familiar faces have had slight upgrades and alterations to their design. Dende has aged up and gotten bigger, Bulma has a yellow jumpsuit and Kori, the perfectly rotund cat from the original series has only got more perfect. Pan and Piccolo will have major roles in Dragon Ball Super: Super Hero, with Pan having grown up somewhat and Piccolo training her.

At New York Comic-Con, Hayashida also commented on the visuals, stating; “We promise you a cinematic experience,” as well as “some unprecedented movement of colour and textures.”

Fans the world over are eagerly awaiting a release date, as well as more details on the English dub. But for now, we’ll just have to get excited for the visual feast that awaits us. 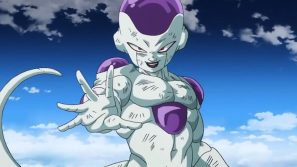