Doctor Who showrunner Chris Chibnall has promised that series 13 of the popular sci-fi series is the most ambitious yet. Chibnall announced at Comic-Con that the new series would eschew the modern monster of the week formula in favour of more long-form storytelling similar to the classic series.

Speaking at [email protected], Chibnall described the series as the most ambitious thing the production team has tried to do. “It’s epic and ambitious, and we do go to a lot of places,” Chibnall said, although he did say part of the reason for the change was to do with Covid-19 and the pandemic.

“It’s very much not a business as usual [this] time, and I think the challenges of getting the show up and running, there were two ways we could go. You could go, ‘We’re just going to do lots and lots of tiny episodes in one room with no monsters’,” he said. “Or we can throw down the gauntlet and say, ‘We’re gonna do the biggest story we’ve ever done, and we’re going to go to all kinds of different places, and have all different characters and monsters, and it’s all gonna be part of a bigger whole’.”

Doctor Who’s cast and crew shared the first trailer for season 13 at Comic-Con as well. The teaser promised that this new season will be “her biggest adventure yet” and introduced two new characters. The first was Dan, played by John Bishop, who’s joining The Doctor (Jodie Whittaker) and Yaz (Mandip Gill) onboard the TARDIS as a full-time companion.

The other character is Vinder, played by Game of Thrones star Jacob Anderson. According to the BBC’s official website, Vinder will be a recurring character throughout the series who joins forces with the TARDIS crew and helps the Doctor as she faces “her biggest ever adventure battling evil across time and space”.

Unfortunately, the trailer didn’t reveal precisely when Doctor Who will return, only saying it’ll return later this year. While we wait, why not check out our list of the best science fiction movies. 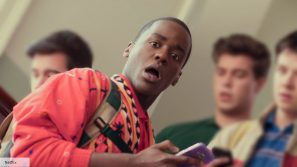