After months of waiting, fans have finally got their first look at Doctor Who series 13. The teaser was unveiled by the cast and crew of Doctor Who as part of Comic-Con @ Home, and it promises that this new season will be “her biggest adventure yet”. The trailer also revealed that Doctor Who will return this year, although they didn’t put an exact date on things which isn’t massively helpful.

Still, it’s always nice to see The Doctor (Jodie Whittaker) and Yaz (Mandip Gill) together. This year they’ll be joined by new companion Dan, played by John Bishop, as they travel around all of space and time, getting into all sorts of mischief along the way. The short teaser doesn’t give much away, instead of giving us just a flavour of what we can expect from this new season.

We know, courtesy of Chris Chibnall that, unlike previous seasons, the thirteenth season of Doctor Who will be very different from any of the previous series. It’s chucking out the older monster of the week formulae that the show’s used since Russel T. Davies rebooted Doctor Who back in 2005 in favour of a more long-form approach. According to Chibnall Series, 13 will be all one story, and he considers it “the most ambitious thing we’ve done since we’ve been on the series.”

Dan isn’t the only new character introduced in the trailer, we also meet Vinder played by Game of Thrones star Jacob Anderson. According to the BBC’s official website, Vinder will be a recurring character throughout the series who joins forces with the TARDIS crew and helps the Doctor as she faces “her biggest ever adventure battling evil across time and space”.

“The Doctor has been a part of my life forever, from watching and rewatching the serials on VHS as a kid and being terrified, to unexpectedly finding my eyes watering when the Tenth Doctor said ‘I don’t want to go’, I always wanted to live in the Whoniverse,” Jacob said in a statement on the official Doctor Who website. “Not only has a lifelong dream of mine now been fulfilled but to be playing a character as fun, adventurous and dynamic as Vinder is the cherry on top. This is very cool.”

The crew also revealed during the panel that some old monsters would be returning for the new series although they left the exact details to our imagination. 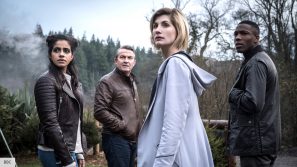