How can you watch Dexter season 9? After eight years, the blood splatter analyst and serial killer is making his return to our screens. When last we saw Michael C. Hall’s Dexter Morgan in the TV series, he’d moved to some small town to start again. Now we’re catching up with him, and his Dark Passenger is still as energetic as ever.

Dexter: New Blood takes place a decade from the conclusion of season 8, with Dexter living in the quiet, cold community of Iron Lake, New York. He’s left crime scene analysis behind in favour of being a quiet shopkeeper, and all seems well. That is, until another murderer begins stalking the people of Iron Lake, and Dexter is forced to revisit old habits.

This new iteration is an exciting prospect for Dexter fans, as Clyde Phillips is back as showrunner, having stepped away after the first four seasons. Phillips isn’t the only other familiar face from Dexter’s early days either: John Lithgow is reprising his role as the Trinity Killer from season 4 for New Blood. It’s all very exciting, but where can you see it? And can you follow weekly? Our investigation has yielded some details you should see.

How can I watch Dexter: New Blood?

Thankfully, viewers in the UK and US can watch new episodes of Dexter weekly. If you’re in America, you can watch the next episode of Dexter: New Blood on Showtime on Sunday, December 5, at 21:00 EST. Then, a day later, British viewers can have a look on Sky Atlantic, on Monday, December 6, at 22:00 GMT.

Some shows, like Succession, do air at the same time between time zones, but that’s mostly a HBO deal. Most other television, like our man Dexter and his need to kill, have to tolerate some discrepancy. Be wary of spoilers before you manage to catch up on Monday evenings!

Can I stream Dexter: New Blood?

Yes! Each new episode of Dexter will be available to stream after it airs. On Showtime, you can find them through the network’s on demand streaming service via Hulu after they’ve aired. Similarly, you can use Now TV in the UK to stay up to date, or rewatch any episodes, after they’ve run on Sky Atlantic.

In the meantime, you can catch up on all previous seasons of Dexter on Showtime in the US, and Amazon Prime Video in the UK. It should be noted that British viewers will need to purchase the seasons digitally in order to do so – they aren’t included as part of the platform’s standard subscription. That said, this should keep all unwanted passengers at bay – for now, anyway. 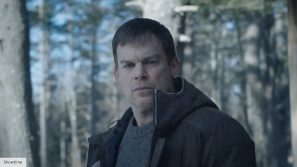