There’s only one thing scarier than Minions just existing generally, and that’s the thought that they’re immortal. Unfortunately, the screenwriter of 2015’s Minions and its long-awaited follow-up Minions: The Rise of Gru – Brian Lynch – has confirmed that Minions cannot, in fact, die.

Minions only live to serve one purpose – find the most evil villain on earth and serve them until being forced to move on to find another host. They have assisted a T-Rex, an Egyptian Pharaoh, and Napoleon, before landing on Scarlett Overkill in the 1960s. This was all before landing their gig with a particular supervillain named Gru.

The Rise of Gru is the fifth film in the Despicable Me franchise which has been going since 2010. The new movie will take us back to the 1970s, as we see 12 year old aspiring villain Gru and his Minions take on a supervillain team called the Vicious 6. Alan Arkin stars as Wild Knuckles, the former leader of Vicious 6, who Gru must team up with.

The Minions have been become ubiquitous throughout the world and you can’t turn around without bumping into some kind of merch branded with the banana-loving gibberish-spouters. If you live in Los Angeles, there is even a freeway that is haunted by the singular eye of a giant Minion – like the eyes of TJ Eckleburg presiding over the valley of ashes in The Great Gatsby or the ever-watchful eye of Sauron.

If you really think about it, the Minions do lead somewhat tragic lives. Forever doomed to wander the earth in search of an evil leader willing to take them on – at least there isn’t a shortage of those. Maybe this is what has led them to madness and why they can only speak in incoherent nonsense?

If you’re looking for alternatives to the Rise of Gru, check out our guide to the best kids movies. 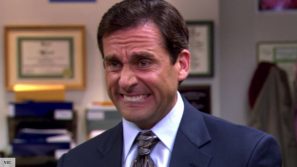 Steve Carell snuck into Jaws and The Exorcist, was traumatised by both
Get involved Continue the conversation over on The Digital Fix Forum