Netflix is gearing up to be the prime place to get your space bounty hunter fix. Ahead of its release for the new live-action adaptation of one of the best anime series of all time, Cowboy Bebop, the streaming service has now officially acquired the rights to all 26 episodes of the original sci-fi series.

The streamer revealed the news on Twitter, with a short teaser for the anime, writing that it will release on the platform on October 21. Currently, the show is available to stream on Hulu for US viewers and on All 4 in the UK. But with Netflix’s announcement, subscribers will now have the chance to catch up on the original animation a month before Netflix’s live-action adaptation– which, judging from its opening title sequence – draws heavy inspiration from the ‘90s TV show.

Directed by Shinichirō Watanabe, the animated version of Cowboy Bebop was first broadcast in Japan in 1998 and later hit international audiences in 2001 before skyrocketing to popularity. Following a ragtag group of space bounty hunters led by a charismatic Spike Spiegel – a man with a mysterious past and a huge appetite – Cowboy Bebop is universally loved for its neo-noir aesthetics, catchy tunes and fast-paced action.

Besides announcing its acquisition of the anime’s distribution rights, Netflix also revealed that the original voice cast of Cowboy Bebop will reprise their roles for the Japanese dubs in the upcoming live-action adaptation.

Confirmed returning voice actors include Koichi Yamadera as Spike, Taiten Kusunoki as Jet, Megumi Hayashibara as Faye, Norio Wakamoto as Vicious, and Gara Takashima as Julia. The live-action version of Cowboy Bebop will star John Cho as Spike Spiegel and will be directed by Alex Garcia Lopez (The Witcher) and Michael Katleman (Primeval).

You can start watching the anime from October 21, in good time for the live-action Netflix TV series on November 19. 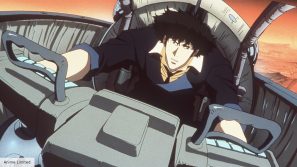