We’re making another visit to the Quick Stop. Kevin Smith’s Clerks 3 has entered pre-production, and the comedy movie has been acquired by Lionsgate.

Smith is writing and directing the film, and he’s currently in New Jersey getting ready to roll cameras, in the same place he began his career with 1994’s Clerks. Deadline reports that many of the cast from the original and its sequel are coming back, such as Randal (Jeff Anderson), Dante (Brian O’Halloran), Becky (Rosario Dawson), and of course, Jay (Jason Mewes) and Silent Bob (Smith).

“There’s a saying from the Tao that goes something like ‘To be great is to go on. To go on is to go far. To go far is to return.’ Thanks to Lionsgate, we get to return to where it all started with almost the whole cast that started it all!” Smith said in a statement. “For the first time since the first time we ever made a movie in 1993, we’re shooting the entire flick on location in New Jersey, as an ode to both the enduring allure of cinema and the resourcefulness and lunacy of its storytellers. Years ago, Dante and Randal made me a filmmaker – so now it’s time I return the favor.”

“To be great is to go on.
To go on is to go far.
To go far is to return.”
On August 2, for my 51st birthday, I return to Quick Stop – the little store that started it all – with my friends Dante, Randal, Jay, Silent Bob, Becky, & Elias! Thank you @Lionsgate for making CLERKS III! https://t.co/7IUNdleg8f

This go around, Randal, now manage of the Quick Stop, has a heart attack, and asks his friends to help him make a movie about his life. Smith is drawing on real life circumstances, as he suffered a heart attack himself in 2018.

“The Clerks movies are audience favorites and many of Kevin’s films like Dogma, Red State, and the Jay and Silent Bob Reboot are a beloved part of our library that continues to delight Kevin’s devoted fans,” Eda Kowan, EVP acquisitions and co-productions for Lionsgate, said. “We’re thrilled to be presenting the next chapter in the Clerks saga to moviegoers worldwide.”

Smith released Jay and Silent Bob Reboot in 2019, an adventure movie featuring an older Jay and Silent Bob on a mission to stop Hollywood from rebooting Bluntman and Chronic. Explaining that would be a whole thing, but the important part is Jay has a daughter in it and mostly it’s about them bonding.

A busy man these days, Smith has part one of Masters of the Universe: Revelation coming to Netflix July 23. We’ll keep you posted on a potential Clerks 3 release date. 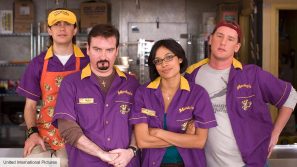