It looks like Daniel Dae Kim’s next role is going to be hotter than ever. The Lost actor recently took to social media, confirming that he has been cast in Netflix’s live-action adaption of Avatar: The Last Airbender – as none other than Fire Lord Ozai.

Posting a GIF of the silhouette of Ozai from the original animated series on Twitter, along with the caption, “It’s getting hot in here,” the actor revealed the big casting news to followers. Fire Lord Ozai is the main antagonist in the story of Avatar, and is the central figure that the series’ protagonist, Aang (Gordon Cormier), must defeat to restore balance to the world.

According to TV Line, the version of Ozai that we’ll see in the upcoming TV series is described as: “The ruthlessly-driven leader of the Fire Nation who demands everyone live up to his impossible standards, especially his teen son, Prince Zuko (Dallas Liu). Ozai’s drive to conquer and unite the world under firebender rule is a family burden — he believes that it’s his destiny to finish a war started by his ancestors.”

This isn’t Kim’s first Avatar outing. In fact, he has a long-standing history with the acclaimed franchise. In the original series, he voiced General Fong, a powerful earthbender who attempts to force Aang to go into the Avatar state. Kim also voiced Hiroshi Sato in Nickelodeon’s follow up series, The Legend of Korra.

Along with Kim, Cormier, and Liu, the cast for the new Netflix TV series includes Ian Ousley as Sokka and Kiawentiio Tarbell as Katara. Albert Kim, known for his work on Sleepy Hollow and Nikita, is the showrunner and executive producer for the upcoming adaptation.

Currently, there is no word on a set release date for the live-action Avatar series. However, we will keep our eyes peeled for any new news and flying bison. In the meantime, the Emmy winning animated series Avatar: The Last Airbender is available to watch on Netflix now. 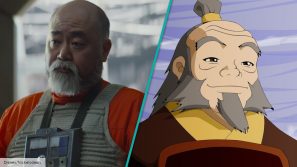 Avatar: The Last Airbender Netflix series casts The Mandalorian actor as Uncle Iroh
Get involved Continue the conversation over on The Digital Fix Forum