In an interview with The Hollywood Reporter on the 30th anniversary of the first Addams Family movie, director Barry Sonnenfeld has explained that the ending of the movie could have been different – if it wasn’t for 11 year old Christina Ricci.

Sonnenfeld describes Ricci – who famously played the fabulous goth Wednesday Addams – as “the most articulate and intellectually gifted of any cast-member” and says that the cast would go to her if they had problems. As early as the table read, Ricci was put to the test because the cast agreed that the ending was terrible.

The dispute was over whether Uncle Fester (Christopher Lloyd) was their real uncle, or an imposter. The cast put their foot down and said he had to be the real uncle and a postscript was added to the ending.

“The cast all gathered in a circle and told all the reasons to Christina why they thought it [the original ending] was a bad idea. She went on for 10 minutes, explaining why it had to be the real Fester,” says Sonnenfeld.

Elsewhere in the interview, Sonnenfeld reflects on working with Raul Julia (who played Gomez to perfection), who tragically passed away in 1994, aged just 54. Sonnenfeld says; “He was born to play Gomez. The character loves life, loves death, loves pain, loves joy, loves his family. The great thing about Raul as Gomez, you can see the joy whether he is happy or angry or sad – he is still joyfully full of life.”

He continues; “I never worked with anyone who is so full of life, so full of joy, on the set, off the set. He was an amazing man.”

Sonnenfeld reflects that he should have enjoyed the huge success of the film, from the opening weekend on, much more at the time. The Addams Family would go onto spawn a critically-acclaimed sequel, was recently revived in animated form and has an upcoming Netflix spin-off series – called Wednesday. 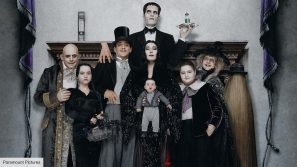