A bizarre fan theory about a Ted Lasso character has cropped up online, and it’s so weird one of the TV series’ writers has stepped in to debunk it. Ted Lasso fans who are either joking or a rather committed bunch of trolls (maybe both) have started to claim that Roy Kent, played by Brett Goldstein, is a computer-generated character. We’re guessing it’s just a meme, but honestly, it’s hard to tell with the internet these days.

Anyway, Goldstein, who also helps write the show, has responded to those claiming he’s a CGI character. In a tongue in cheek video shared on Instagram, the star reaffirmed that he is indeed “a completely real, normal human man” who does “normal, human, basic things like rendering and buffering and transferring data.” He finished by saying, “this was his final word on the matter.

Now we don’t know anyone who doesn’t love rendering, buffering, and transferring data, but for some reason, we’re not entirely convinced by Goldstein’s video. Maybe it’s got something to do with his colossal cartoon face? That or the hands, they can never get the hands right even in the best animated movies.

In all seriousness, the fan theory seems to have been born on the Ted Lasso Subreddit where user cutterman1234 posed the question: “I just started watching the pilot, and I’m up to the scene where Roy is called into Ted’s office. Am I crazy, or does he look like a complete CGI character?”

While some fans jumped at the opportunity to make a joke about Goldstein being animated by a computer, others had different suggestions for Roy’s uncanny appearance in the first episode.

“Maybe it’s just the angle lighting and camera all just right for the coincidence,” one user suggested. While another Redditor asked: “Remember how films used to shoot in, I think 120 FPS, and they looked super weird? I think the Hobbit was filmed this way. Could it be that effect?”

Whatever the reason, it’s good that Brett’s come out to shoot down the baseless accusations about him being a digital facsimile. Anyway, I have to go now I’ve more data to transfer. 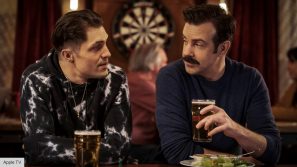