The stars of Supernatural prequel The Winchesters – in which Drake Rodger and Meg Donnelly play younger versions of Sam and Dean’s parents – have been speaking about it being an “honour” that they “took seriously.” They have also said that Jensen Ackles was an invaluable help in bringing the characters to life.

“It’s an honour,” Rodger, who portrays young John Winchester, told TVLine. “We’ve got to take it real serious. We owe a lot to the fans, so we’ve got to be there and we’ve got to represent.” Rodger also said that the origin story of the Winchester parents meeting and falling in love will be delivered “in a cool way that you don’t quite expect.” He added that the pair’s first encounter is “a supernatural meet-cute.”

Rodger says he took a lot of inspiration from Jeffrey Dean Morgan, who played John Winchester in Supernatural, which ran for a whopping 327 episodes between 2005-2020. “He’s like the portrait. That’s where we end. Like, I get to paint. He definitely laid out the path for me.”

Meg Donnelly, who plays Mary Campbell, says that Jensen Ackles – the executive producer and narrator of the show – was a helpful presence on-set. “He was on set every single day of the pilot, just like being super collaborative, giving us notes, telling us about the universe that we might not know about. So it was really good insight.”

Helping John and Mary in their fight against monsters and demons will be Latika Desai (Nida Khurshid) and Carlos Cervantez (Jojo Fleites), a couple of fellow young hunters. Rounding out the cast is Bianca Kajlich, who plays Millie Winchester, John’s mother.

The Winchesters will debut in Autumn 2022, but we don’t know the exact premiere date yet. While we wait, check out our guide to the best sci fi series. 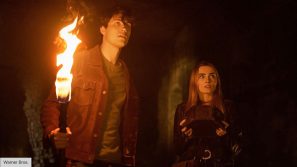 The Winchesters release date, cast, plot, and more
Get involved Continue the conversation over on The Digital Fix Forum