20th Century Studios have announced a new film within the Predator franchise – called Prey – set in the world of the Comanche nation 300 years ago. It is directed by Dan Trachtenberg, who directed 10 Cloverfield Lane, as well as episodes of Netflix’s Black Mirror and Amazon’s The Boys. The film will be available only on Hulu in 2022.

The working title of the film was Skulls and it wrapped filming in September of this year.

The first film takes place in the Central American jungle, where a special forces unit encounter an alien creature, who can track humans with thermal imaging.

An image released with the Prey announcement depicts a misty, white forest. In the foreground is what looks to be a Comanche woman hunting with a bow and arrow. A large, almost indistinguishable shape is in the background behind her with the Predator’s signature of three red dots in a triangle on it.

An all-new entry in the @Predator franchise, “Prey” is set in the world of the Comanche Nation 300 years ago. See the original film directed by Dan Trachtenberg (“The Boys,” “10 Cloverfield Lane”) only on @Hulu in 2022. pic.twitter.com/3A3KSiWoqn

The logo is made up of grey rock-like letters with scratches on them.

It is unclear at this stage how closely related to the Predator franchise Prey will be. It could be like 10 Cloverfield Lane and work as a standalone property. We are looking forward to finding out! 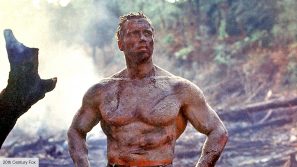