The Munsters (1964) is a classic spooky American sitcom that has been delighting audiences for decades, and now it looks like the series is rising from the dead thanks to Rob Zombie. The heavy metal singer turned director confirmed via Instagram that his next blockbuster will be a Munsters remake, reviving the cult classic and adapting the supernatural series with his own personal touch.

Zombie announced on June 7 to followers and moviegoers that “the rumours are true!” and that a new adaptation of the beloved series is officially in the works. The news came through an Instagram post, with the Halloween director saying, “ My next film project will be the one I’ve been chasing for 20 years! THE MUNSTERS! Stay tuned for exciting details as things progress!”

The upcoming film is confirmed for Universal 1440 Entertainment – a direct-to-video subsidiary of Universal Pictures – and will likely be released through the American streaming service Peacock. No other production details have been publicly released yet, but fans don’t seem too stressed about the technical development of the film right now.

Before The Addams Family, there was The Munsters, and the original creepy comedy holds a special place in every goth and horror lover’s heart (Rob Zombie included). However, despite being a long time fan of the series himself, there has still been a mixed response to Zombie remaking the classic story. Zombie’s history of rebooting cult classics, such as John Carpenter’s Halloween, is a divisive topic, to say the least, leaving many worried about where the future of The Munsters may be heading.

Rob Zombie’s directorial vision is known for being fun, leaning into typical horror tropes. But his use of tilted camera angles and love of red lighting isn’t for everyone, causing some apprehension among Munster fans following his latest announcement. However, many are also intrigued to see if the director can elevate the series, hoping that he can enhance the ghoulish charm, and look forward to seeing how he adapts the classic.

How about some full-blown horror to keep you up at night? Check out the best horror movies of all time 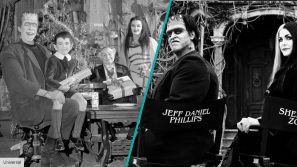