Michael Keaton has set the tongues wagging of fans of both the DCEU and the MCU by making a few throwaway comments on Jimmy Kimmel Live. He casually dropped that he’s currently shooting “some Vulture stuff” and people have deduced that this can only really mean one thing – that Keaton is in Doctor Strange in the Multiverse of Madness, reprising his villainous role from Spider-Man: Homecoming.

The Doctor Strange sequel is currently undergoing “significant reshoots,” most likely due to pandemic-related delays and reshuffling of the order of some MCU titles (both film and TV).

But it’s not just Vulture that Keaton discusses on the talk show. At 11m20s into the clip, Kimmel brings up Batman and says; “you’re in The Flash, you can’t deny it. We know Ben Affleck is a Batman in this as well.”

Keaton says; “there’s a lot of things I can’t say, because I don’t really understand what’s going on. Because I’m in two worlds – I’m in the Marvel world and DC…I’m afraid I’m not going to know the answer (to Kimmel’s question), because I get really confused, I don’t really know a lot of the lore.”

Kimmel finally asks Keaton; “did you ask them – is George Clooney in it? [referring to The Flash] Is Val Kilmer in it?” Keaton replies that he didn’t. He continues; “Here’s how bad it is. I’ll show up [on the set of The Flash] and say – at what point does Spider-Man show up? When does the Hulk come in?”

Keaton continues to plays dumb; “I showed up, when I played Vulture, which was really a fun character, I gotta say. And they have to brief me…and I’m saying ‘right, right’ but I have no f*cking clue. I have no idea who’s who, or why or where or even where I am.”

The clip can be viewed below;

It’s an exciting time for both fans of the Tim Burton Batman films and for those who thought that Vulture in Spider-Man: Homecoming was one of the best MCU villains to date. 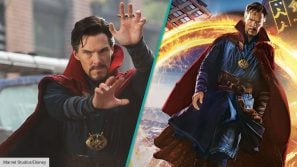